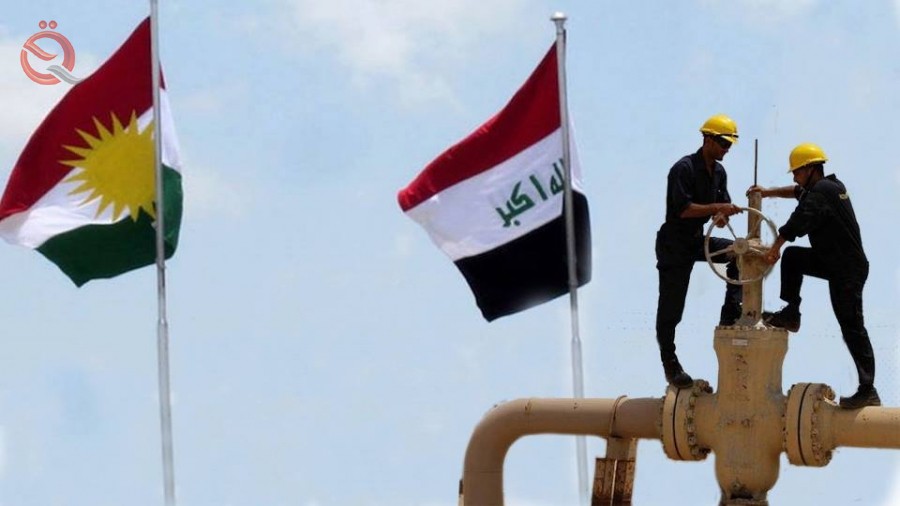 When the Iraqi parliament passed the budget this year half a year ago, its law included clauses and conditions required by the Iraqi government to implement them, among them to hand over the Kurdistan region proceeds of selling 250 thousand barrels of oil per day to Baghdad, in exchange for salaries of regional staff and Peshmerga forces, but Kurdish leaders are hesitant until today In its payment.

This position, according to the newspaper "the new Arab" back to the previous conflict over oil revenues and the division of wealth, amid pressure exerted by political forces in Baghdad on the government to get out of silence and to show the fact of what they consider Erbil evasion of previous commitments.

Baghdad was supposed to receive oil revenues issued by the Ministry of Natural Resources in the Kurdistan region since the beginning of this year through Turkey to Baghdad, after the fulfillment of the Iraqi government promises and send salaries of previous months to the staff of the region, the latest batch in May.

But that did not happen amid leaks and rumors circulated by political circles have not confirmed or denied by the government so far, talking about the conditions of a new Kurdish and try to link the file of the delivery of oil issue Kirkuk, and the other talk about the region has revealed debts owed to external parties and trying to pay from oil revenues that As well as his suggestion that he would like to redraft the agreement on which the current year's budget was passed in parliament.

According to an official in the General Secretariat of the Council of Ministers, the Iraqi government will soon, as a precautionary step, to announce the suspension of payment of new funds to Erbil from the share of the province approved in the budget this year, unless the Government of Kurdistan to stop procrastination in payment of dues to sell oil.
The official also pointed out that Erbil is now condemning the sale of 3 million and a half million barrels to be paid for Baghdad on the price of selling world oil and not on the average price of a barrel of oil headquarters in the Iraqi budget of $ 56.
He stressed that the salaries of the employees of the region will be paid normally, but that the share of the share of the development budget will be affected, while the government has several options, including the deduction of money that was not paid by the Government of Kurdistan from the sale of oil and handed over the rest of the amount.

Early last month, Iraqi Prime Minister Adel Abdul Mahdi said that his government continues to pay salaries to the staff of the region, although his government did not deliver any barrels of oil to the federal government, as stipulated in the budget items, and on the basis of the agreement between the two sides.

During a press conference in Baghdad on the second of last month, Abdul Mahdi pointed out that "the handover of salaries to employees is right for our people in Kurdistan because they are our children." He said that "there are political differences, and it is not proper to make them a source of threat to social peace."

Abdul Mahdi said that the federal government does not pay the remaining part of the budget of the region (other than salaries), because the budget law obliged them to deduct the corresponding amounts represented by the value of 250 thousand barrels of oil per day.

In the midst of several accounts of corruption in the parliament about the reason for Erbil's delay in the payment of oil revenues, based on the agreement reached earlier, the government did not confirm any novel, and did not deny, although a number of members of Parliament spoke to local media, including that Erbil introduced the issue of Kirkuk And the need to involve Peshmerga in its security file, a condition for the delivery of oil revenues.

But this information seems far from reality when compared to other more acceptable accounts, including that the region entails payments to repay loans from third parties had to get after the reduction of Baghdad budget between 2014 and 2017, and needs to pay their premiums from the proceeds of the sale of oil, To a new agreement with Baghdad.

Fears of the collapse of the financial agreement

In another narration that the region wants to pay this money to Baghdad is slanted and waiting for Baghdad mechanism, the decision to hold Baghdad share of the region may lead to the collapse of the financial agreement on which was voted on this year's budget, which may also cause a shake in the markets of the region Depends mainly on its supplies from Baghdad.

According to a member of the Kurdistan Union, Aziz Aziz, officials in the region to continue with Baghdad and the Ministry of Finance in the federal government, and the leader of the Democratic Party Fuad Hussein, ruled out in an interview for the "New Arab", that things deteriorate to the extent of Baghdad to implement the budget items in what Concerning the Territory, while consultations were continuing to resolve some technical aspects of the delivery mechanism.
He also considered that "the deputies of other blocs are trying to exaggerate or distort the facts and linking the oil file with other political files."

MP for the "coalition of the conquest," Mansour al-Baiji, said that "Finance Minister Fouad Hussein and Prime Minister Adel Abdul-Mahdi violated the budget agreement, because they pay salaries without oil revenues, and Abdul-Mahdi bears full responsibility before the parliament and the Iraqi street if he agreed to any condition Other than stipulated in the budget, "revealing the existence of a campaign to collect signatures to question the Minister of Finance, and has signed so far more than 70 deputies.

At the time that MP Abdel Karim Abtan, the government is required to resolve the file quickly that the first half of the year has passed and did not reach any amount of oil revenues of the province to the treasury of the state, it seems that the government has many options and many, including the exercise of federal powers and does not allow the process Exporting oil from the region, by informing the countries that purchase it of the need to obtain prior permission from Baghdad.

The expert on the region, Ali Naji, explained in turn that "the Kurdistan region will not leave an opportunity to return to the situation before the September 16, 2017 (that is after the referendum on the secession of the territory from Iraq) in the disputed areas, including Kirkuk."

Naji told the "new Arab" that "the Kurdish parties in the region considers the imposition of Iraqi forces control of the disputed areas on 16 September 2017 national setback, and all Kurds, despite their internal differences, united by the demand to restore the situation before that stage in Kirkuk and Nineveh within the regions Disputed ", referring to the military campaign carried out by Iraqi forces and regained control of Kirkuk and other cities in the north of the country, after the organization of the province referendum for separation from Iraq.

Page 1 of 1
Permissions in this forum:
You cannot reply to topics in this forum
Who is online?
In total there are 113 users online :: 0 Registered, 0 Hidden and 113 Guests :: 3 Bots