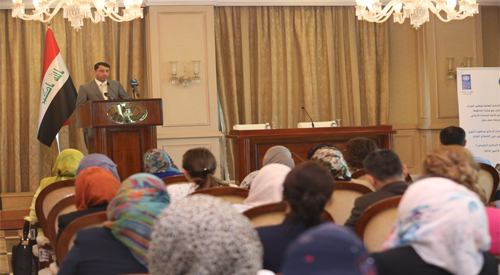 Secretary-General of the Council of Ministers Hamid Al-Ghazi said that Iraq is working continuously with international, international and local organizations to ensure the optimal empowerment of women, based on the declared government program.
This came during the inauguration of a workshop organized by the Women's Empowerment Department of the Secretariat to develop a roadmap for the adoption of the tool for the evaluation of gender mainstreaming in the public sector.
The Secretary-General pointed out that gender was a cornerstone of building and sustainable development, adding that experience had shown that empowering women led to basic development.
He pointed out that Iraq is going through a new political stage based on planning to build stability and prosperity, so the Secretariat of the Council of Ministers launched with the United Nations Development Program in Iraq, the gender project.
The Secretary-General stressed the Government's keenness to eliminate various forms of discrimination, indicating that he looked forward to hearing the success stories achieved by society in the way of permanent construction.
Ms. Ibtisam Aziz, Director of Women Empowerment Department, reviewed the objectives of the workshop launched by the department to integrate the concept of gender and reduce the gender gap in public institutions.
UNDP Resident Coordinator Zeina Ahmed said WFP was developing a sustainable development plan through 2030 and drawing up a long-term road map for sustainable development and social integration, which summed up the efforts of the Iraqi government to commit itself to mainstreaming the gender perspective in the public sector.
The workshop included a presentation on the integration of gender in the public sector through the government program and traditional and modern methods, and discussion of the outcomes of the working groups formed to come out with the recommendations and the roadmap for development and social integration