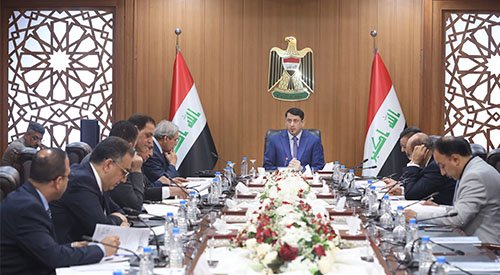 The Secretary-General of the Council of Ministers, Hamid Naim Al-Ghazi, urged the relevant authorities to expedite the identification of mechanisms for the transfer of ownership of land plots to investors and to determine certain completion rates for their transfer.

This came during his chairmanship of the Tadawuli meeting, on Sunday, called for by the Prime Minister, in the presence of the relevant bodies in government institutions and the private sector.
The Secretary-General stressed the importance of ensuring investors' seriousness in carrying out projects, reducing fraud and delaying some investors.

The participants discussed the current mechanisms for calculating completion rates and the possibility of determining new ratios in the light of what will be agreed by all the parties concerned for the purpose of including them in the minutes of the recommendations of the meeting and approving them and presenting them to one of the meetings of the next cabinet.

The meeting was attended by the Chairman of the National Investment Commission and heads of investment bodies in the governorates of Baghdad, Basra, Anbar and Najaf, representatives of the Ministries of Finance, Construction, Housing, Municipalities and Public Works, and a number of investors in the private sector.

Page 1 of 1
Permissions in this forum:
You cannot reply to topics in this forum
Who is online?
In total there are 187 users online :: 2 Registered, 0 Hidden and 185 Guests :: 3 Bots