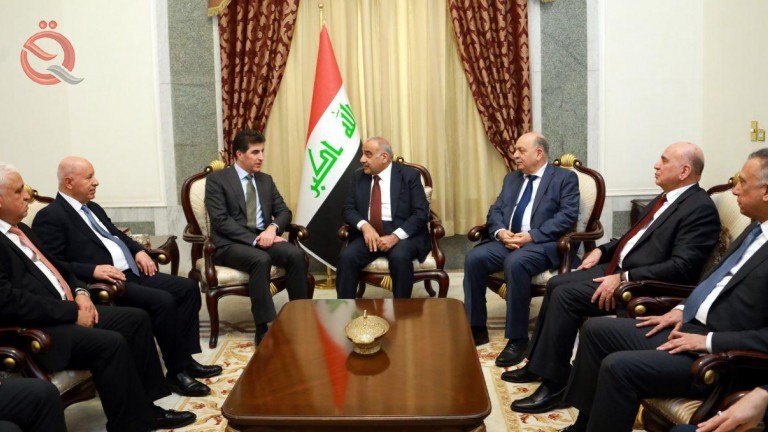 The Deputy Prime Minister for Economic Affairs, Minister of Finance Fouad Hussein that the Kurdistan region has not yet received more than half of its share of the budget of 10 trillion dinars, and that paid is the salaries of employees, a legal obligation can not punish staff for a dispute on the issue of oil, expressing optimism Resolve outstanding issues between Baghdad and Erbil.
"It is wrong to evaluate everything in terms of corruption. There is a great effort to fight corruption in the current government and it is my priority to fight corruption. But corruption must be tangible and there are problems at work," Hussein said in a television interview with Al-Iktissad News. "Corruption is the first challenge, but the problem lies in the culture of corruption, along with a culture of accusation towards the government and a kind of mistrust between many of the people's constituents and government institutions."
"The lack of strong institutions is one of the causes of corruption in addition to the adoption of the monetary economy without e-economy, not to mention wars," noting that "the settlement of salaries and deal directly with banks the first steps to fight corruption."
On the recent visit of the President of the Kurdistan region of Najirvan Barzani to Baghdad, Hussein said that the meetings held in the Iraqi capital with the three presidencies included "the examination of important points on the issue of oil and linking them to the budget and the share of the region and disputed areas and future relations," explaining that "the dialogue was frank about Problems and mechanisms and solutions, and it was agreed to meet representatives of the parties next week to diagnose the program of work and identify experts in various fields, including oil, financial, security, military and administrative.
The Federal Minister of Finance pointed out that "the relations in the ongoing development between Baghdad and the region, and the intention of the Prime Minister to visit the Kurdistan region for this purpose," stressing that "distrust disturbs the problems, but the current situation has created confidence is growing constantly and part of it relates to the existence of Adel Abdul Mahdi, Ministers, and I think that wisdom and moderation are now governing the country towards finding solutions. "
"The budget includes a set of paragraphs related to the region, including oil and compensation of employees, and the misconception is to say that the Kurdistan region received his share of the budget did not deliver oil," pointing out that "pay is only the salaries of employees, while the share of the region is 10 trillion JD, that is, more than half the share of the region has not been paid so far, and payment of salaries is a legal obligation, can not punish staff for a dispute on the issue of oil.
He explained: "With regard to the delivery of 250 thousand barrels of oil, the joint committees will meet to discuss the matter, there are debts to the region because of cutting off its share of the budget for the three years 2014-2016, which affected the financial and economic situation, and must be discussed how to deal with this and is under discussion , And I am optimistic that there is a clear trend from both parties to solve the problem. "
"The prime minister put forward mediation between the United States and Iran, and I think that Iraq can play a role in exchanging views. Both sides trust Iraq, but the negotiations depend on the situation of the two countries," he said. There is Japanese, Omani and Swiss mediation. "