I bring you much news today.

You know I really get a kick out of these idiot “jackass” gurus who think they know it all over these years. Even now they rely on rumors from Iraq about the small category notes being out and in particular the coins. In my last newsletter I presented very STRONG EVIDENCE and FACTS that these old coins launched in 2003 are no longer valid currency.

There is absolutely NO law since that time that makes them now legal tender. Get it? If so, I want to see the law. Show it to me. I am waiting…tick tock…tick..tock…

So rumors are just rumors. Idiots spread rumors. Intelligent people rely on the FACTS and VALIDATE what they say before opening their BIG FAT mouths.

So, did it ever occur to anyone that someone is pumping you to buy these defunct coins? Oh yes, they are good at it too. Afterall they got you to buy billions in defunct, illegal ZIM currency and even to this day they still pump it on their calls as they say the banks will exchange it. Really? I showed everyone 1000% proof already that there is NO secret deal with the USA to exchange these notes. They are NOT bonds and they are NOT backed by GOLD (to the demand of the bearer). Here is a complete story of these Zimbabwe notes and why they are no good.

Just wait till you go to the bank (or exchange center) and try to exchange any of these older 2008-2009 ZIM notes. You are going to get laughed at by the exchanger ....lol..lol..lol…

The Council of Anti-Corruption, Iraq, on Tuesday, its 13th meeting under the chairmanship of Prime Minister Adel Abdul-Mahdi.

In a statement, the Council noted that a range of topics on the agenda had been considered, including the discussion of the sale window of foreign exchange.

Baghdad: Yes, Iraq
The Central Bank of Iraq intends to launch the service of electronic travel cards that enable the Iraqi traveler to work in all countries of the world.
This service provides the Iraqi traveler the possibility to pay according to the card in all currencies, in addition to other features provided by such as safety and avoid theft and loss of money.

STATUS OF THE ONGOING ELECTION SAGA (since May of 2018)

Over the weekend the house speaker claimed he would include a vote on the schedule for Saturday June 22nd of the candidates to fill these proxy positions of the cabinet.

Then later comes this article:

The meeting of political leaders at the Peace Palace yesterday underlines that the cabinet ministerial positions will be completed within the remaining two weeks of the June deadline.

Then even later this article:

Article 8 e in the budget of 2019 of 30 June 2019 set a date for the termination of proxy positions for all leading positions in the Iraqi government.

I believe that the application of this article in a transparent and without prior political intentions means that the competent authorities in the government and in the House of Representatives must adopt important and fundamental criteria that begin first and foremost from the analytical and analytical view of the results of the work of the official in the position of an agency while assuming the responsibility of the office and what he could.

And his team to achieve national achievements and have a direct impact on achieving the central objectives of the previous and current government within the hubs of its government programs approved by the House of Representatives.

Then on June 20th out comes this article:

Baghdad: Al Furat News} The House of Representatives, next Saturday, its regular session.

The agenda includes the completion of the vote on the cabinet and special grades and the end of the file of the state administration by proxy.

(Mnt Goat – Can they do it this time? If they do, we are in good shape to maybe see a reinstatement prior to the end of June. If not, they we wait again.)

Court decision is out: Turning over Trump tax returns to the house committee lacks a legitimate legislative function

Who really spied on who?

Inside an Impeach Trump rally. Are these confused people? Where are the FACTS when they are asked simple questions?

Political Leaders Held A Meeting To Discuss 6 Points
Twilight News / Political leaders held a meeting at the headquarters of the Iraqi Republic, attended by Prime Minister Adel Abdul Mahdi.
According to a statement issued by the Presidency of the Republic, the two sides discussed what was stated in the Supreme Reference speech on June 14, and the internal and regional developments, and stressed the following:
1. Giving the file of services priority in the performance of government and in support of the political forces and alleviating the suffering of the people, Electricity with exceptional effort in attention, performance and control of implementation.
2. Emphasize the importance of hard, honest and transparent action by the state authorities and the political, community and media forces to confront and stop rampant corruption and emphasize the principle of the rule of law to build a harmonious state free of the scourge of corruption, which, along with terrorism and violence, bears the responsibilities of many shortcomings in various facilities and fields. It was also stressed the need for cooperation of all, from the institutions of state and political forces, to facilitate measures to address corruption and accountability spoilers, and agreed that the meeting will not be the cover of any corrupt whatever its location.
3. The participants stressed the support of the executive and legislative authorities to review laws that could cause social differences or give unfair privileges.
4. Agreement on the need to “complete” the ministerial cabin, with a maximum period of two weeks from now, in order to enhance confidence in the ability of the political forces of the parliament to overcome differences and avoid these bottlenecks in such circumstances.
5. The political forces are committed to the exclusion of the state from party quotas and to be chosen on the basis of competence, professionalism, integrity and career progression, in order to ensure national balance.
6 – Support security and intelligence efforts to eradicate terrorism, and support the security of the citizen from any infringement or infringement of the rights of any
*************************************************************

Disclaimer: All information in this newsletter is not intended for investment decisions / purposes. Mnt Goat is not a financial analyst, planner, banker, attorney or associated in any role with giving out professional investment advice.

In ending I want everyone to know your constant prayers in the fight against evil (ISIS) in Iraq have worked. God has guided these young men and women on the battle field. The major war with ISIS has been over since Dec 2017. Let us all know that there is a new battle now to fight. A battle to save our homelands from the corrupt politicians and secret societies who are bent on taking what they want from our current wealth and from future generations without our permission. We must keep praying for the end to the rapid corruption and enslavement of people in Iraq and in the United States. We must pray for our leaders when they are being guided by the Holy Spirit. We must stand by them and let them know we are still there to support them, even after the election is over. I have composed a prayer maybe we can all pray today in our own way and until the reinstatement of the Iraq dinar occurs.

“For all leaders of all nations, that they may be anointed by the Holy Spirit to do God’s will to bring about abundance and prosperity to all.

To fight this waging war on corruption, our freedoms, our liberties, socialist plans and injustice.

That the FREE WORLD may be a shining example for the rest of the entire planet.

In the name of Jesus Christ our King and Savior, Amen”

Auf Wiedersehen
Much love to ya all,
Mnt Goat 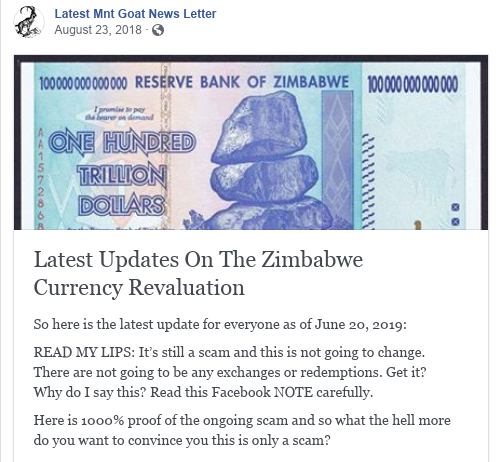