Minister of Planning Dr. Nouri Sabah al-Dulaimi inspected on Saturday the reality of the service in Nineveh Province. The Minister also met with the Governor of Nineveh and members of the provincial council and a number of officials in the local government. General of the Council of Ministers, the Deputy for Nineveh Province Ikhlas Al-Dulaimi, a number of relevant authorities in the central government, Ms. Yara Al-Salem of the World Bank, a number of representatives of the international community and the United Nations Development Program, and Ms. Yoko Otsuki, The United Nations Human Settlements Commission in Iraq, and the Advanced Staff of the Ministry of Planning.
Dr. Nouri al-Dulaimi also praised the generous support of the international community and the World Bank and the active efforts of the United Nations Development Program (UNDP) and the United Nations Human Settlements Program in Iraq (UN-Habitat), stressing the importance of these efforts in restoring stability and recovery in Nineveh province.
During his visit, the minister inspected the work of the second bridge of Mosul, stressing that he would provide all necessary support to complete the project as soon as possible, which is being rehabilitated with the support of the World Bank. His Excellency also continued the efforts of the United Nations Human Settlements Program Destroyed housing on the right side of Mosul.
The Minister of Planning inaugurated the building of the Faculty of Engineering at Mosul University and the Karama Police Station on the left side of Mosul City, which were rehabilitated by the United Nations Development Program (UNDP).
For their part, the ministers in the local government of Nineveh appreciated the efforts of the Minister of Planning, directives and procedures, which were directed by His Excellency during the visit, stressing the great contribution of this support in moving the wheel of construction and development in the province during the coming period.

Minister of Planning Dr. Nuri Sabah al-Dulaimi inspected on Saturday the efforts to restore stability in al-Hamdaniya district in Nineveh province. The minister also held a meeting with the local government and the judicial activities, which was rehabilitated by the United Nations Development Program in Iraq (UNDP) In the presence of Mr. Mansour Al-Murad, governor of Nineveh, Mr. Hamid Al-Ghazi, Secretary General of the Council of Ministers, and a number of advanced cadres in the Ministry of Planning.
Dr. Nouri al-Dulaimi briefed on the efforts exerted to restore stability and highlighted the difficulties faced by the working teams. He stressed his continued efforts to provide all necessary support for the implementation of more vital projects within the judiciary and the governorate of Nineveh.
In addition, the Minister of Planning inspected the service situation in Hassan Cham camp, the difficulties facing them, and the best ways to return them voluntarily to their areas, stressing that the ministry included the villages where the displaced people are in support of the Social Development Fund to provide the best services to the people of these villages and their guests from displaced families .
The minister pointed out to the national efforts that the governmental and international agencies concerned have carried out to provide a safe and stable environment for the voluntary return of displaced people to their areas. He pointed out that this year will witness the return of many families. And express their sincere appreciation for the visit of the Minister and the measures that he carried out during the visit in cooperation with the local government and the international community. 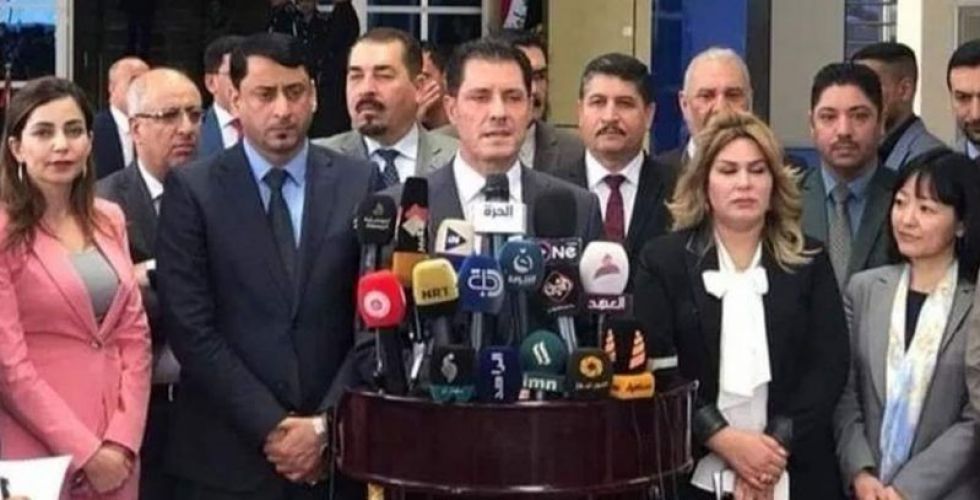 It is hoped that new projects will soon be launched in Nineveh province, including the rehabilitation of hospitals and the rehabilitation of bridges, while on Saturday visited a government delegation and provincial parliamentarians to inspect the reality of service and follow-up efforts to restore stability.

"A government and parliamentary delegation that included Minister of Planning Nuri Sabah al-Dulaimi and a number of members of the House of Representatives and related parties in the central government, and a number of representatives of the international community and the United Nations programs in Iraq and the World Bank arrived in the province," the Information Office of the Minister of Planning said in a statement. Nineveh to inspect the reality service, and follow-up efforts to restore stability and reconstruction in the province. "

"The relative security stability in Mosul needs the continued support of the federal government," Dulaimi told a news conference in the province.

In turn, Secretary-General of the Council of Ministers Hamid al-Ghazi said during the conference that "there are many projects will be launched in the province of Nineveh, a large part of which is the restoration of hospitals and rehabilitation of bridges in addition to the projects of building schools and infrastructure."
He added that "there are projects implemented by the government and other projects initiated by the organizations of the international community," stressing "the determination of the government in Baghdad to restore the stability of the province of Nineveh in all areas by bypass bureaucratic mechanisms to restore life to Nineveh"

The governor of Nineveh province, Mansour al-Maraid, said that this visit confirms the support that Nineveh receives from these authorities since the beginning of our ascension to the post.
Al-Maraid said that "the magnitude of the disaster suffered by Nineveh is great, which requires extraordinary efforts and special powers and continuous support," stressing that "this visit confirms the interest of Baghdad to maintain the next role is the role of the local government and the exploitation of support
Government ".

In another matter, a member of the provincial council Abdulrahman al-Waka'a told the "morning": "The civil defense teams announced their control of a fire broke out near the perimeter of the sulfur plant in southern Mosul, because of the sharpness of spark from the secondary power station in Mashraq." He added that " Natural in the village of Mashraq and the laboratory. "