There is a reason Tony has been convicted twice for fraud.

For the newbies, and the long time gullible followers, you have many more years of this kind of stuff to come!

Caller 610 is on the calls for a reason. Have you figured it out yet? LOL 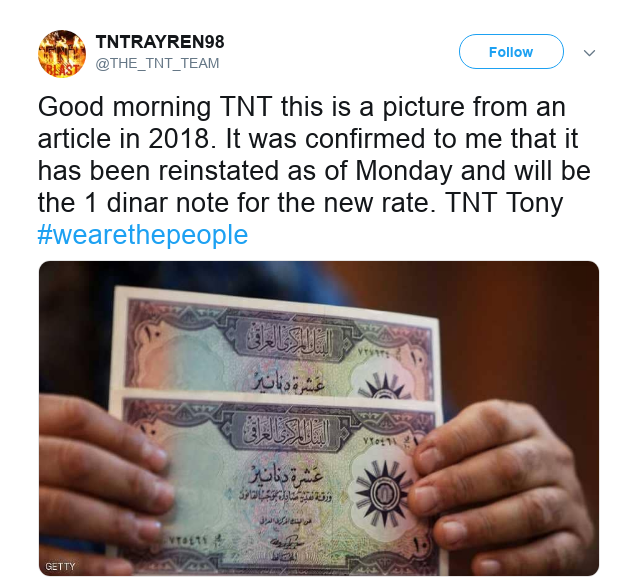 Is this the article he saw to fool everyone...Again? LOL

Iraqi enthusiasts search for relics of royal past 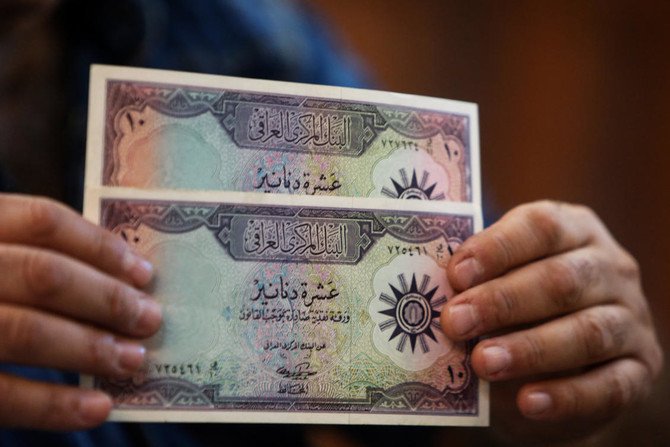 A man holds up preserved specimens of Ten Iraqi Dinar banknotes, during a historical relic auction at the Moudallal cafe, Arabic for “pampered,” in the Iraqi capital Baghdad on March 3, 2018. (AFP)

BAGHDAD: At the heart of a Baghdad flea market, nostalgia for Iraq’s royal past is on full display as collectors and investors gather to buy relics from a bygone era.

Inside the Moudallal cafe, Arabic for “pampered,” a hundred men from across the country carefully follow the auction of momentos from the nearly four decades of monarchic rule that ended with a bloody coup in 1958.

“There is a feeling of nostalgia among the customers. Take the banknotes, their manufacture and quality were much better before, that’s why the prices go up,” says 52-year-old auctioneer Ali Hikmat.

With a booming voice, the towering man who has worked in the covered market since 1992 offers his goods up for to the highest bidder.

All sorts of keepsakes are up for grabs: banknotes, coins, stamps and decorations.

Most date back to Iraq’s royal era, but there are also a few items from the early days of the republic that followed after general Abdel Karim Kassem toppled the monarchy.

Nothing is on offer from the decades of dictatorship under Saddam Hussein.

For the Iraqis hunting out their own souvenir of the past, the period of royal rule represents a golden age for their country.

The founding of the Kingdom of Iraq under Faisal I — who fought alongside T.E Lawrence during World War I — marked the emergence of the modern state after the fall of the Ottoman empire.

The country gained independence in 1932 and the monarchy lasted until Faisal II was executed during the coup.

“Of course we are nostalgic for the royal period. All the main structures in this country were built during that period, be it bridges, dams and the rest,” says 53-year-old Ahmad Kamal, who owns a real estate agency in Baghdad.

“The royal era marks the beginning of the Iraqi state,” he says. “If we compare it to today, it was much better before.”

The comparison between the past and present is a potent one — as Iraq recovers from its latest round of devastation and bloodshed following the campaign against the Daesh group.

That violence is just the latest to roil the country that has been through war with Iran, the US-led invasion and a brutal sectarian conflict since the 1980s.

Saad Mohsen, a professor of modern history at the University of Baghdad, insists that back under the constitutional monarchy Iraq was “more democratic and cleaner than today.”

“We were far from the blood and fighting that we have come to know,” he says.

For clothing merchant Hussein Hakim, searching out souvenirs from previous epochs helps him to delve into Iraq’s rich heritage.

“The past fascinates me,” he says.

“I’m interested in the history of my country through the objects I collect from the Ottoman period up until the republic, but it’s the royal era that I prefer most,” the 43-year-old adds, proudly displaying two effigies of King Ghazi and King Faisal II.

The weekly auction in this small cafe is exceptional not only because of the sheer number of items on sale, but also because everything must be sold regardless of the price, allowing a lucky few to do snap up some bargains.

But the desire for all things connected with the era of royalty does not mean Iraqis are looking to bring back the monarch.

Sharif Ali Ben Hussein, who claims to be the legitimate heir to the Iraqi throne, has never managed to get elected to parliament.

In the wake of the 2003 US invasion, he returned to Baghdad after 45 years in exile but his claim that “a clear majority” of people wanted the monarchy back failed to gain traction.

For Adel Karim Sabri, who runs the magazine “My Hobby” specializing in stamps and old bank notes, “the past is always more beautiful because it is made of memories.”

And for many of those shopping at this market of memories, scouring for relics appears to have more to do with financial gain tha historical interest.

“They buy because they have money and it’s a good investment,” the 76-year-old says.

Page 1 of 1
Permissions in this forum:
You cannot reply to topics in this forum
Who is online?
In total there are 82 users online :: 0 Registered, 0 Hidden and 82 Guests :: 1 Bot

Yesterday at 1:28 am by RamblerNash

Yesterday at 1:22 am by RamblerNash

Yesterday at 1:19 am by RamblerNash

Yesterday at 1:18 am by RamblerNash