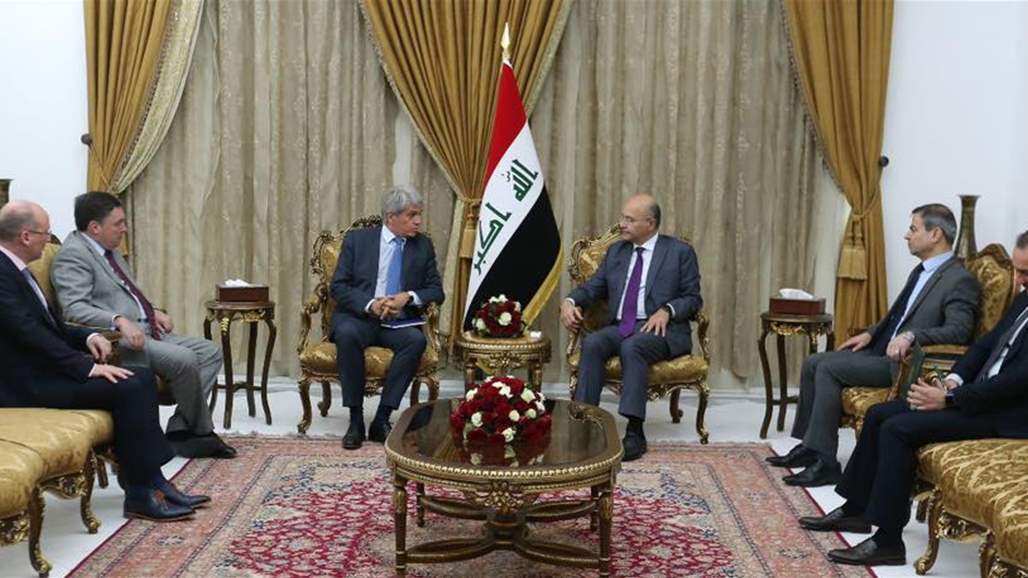 The President of the Republic, Barham Salih, on Sunday, Iraq's keenness to establish balanced relations of cooperation between Iran and America, while stressed the importance of adopting a serious and constructive dialogue to solve all problems.

The Presidency of the Republic said in a statement received by Alsumaria News, that "Saleh received today, at the Peace Palace, ambassadors of Britain, Germany and France in Baghdad, and during the meeting reviewed the development of relations between Iraq and the European Union countries and ways of continuing cooperation in all fields, The situation in the region in light of the current tension between the United States and the Islamic Republic of Iran. "

Saleh stressed during the meeting, "Iraq's keenness to establish balanced relations of cooperation with its neighbors and brothers and friends, including the United States and Iran, and to promote security and stability and economic prosperity in the region and the world," explaining that "our dialogues with neighboring countries and Arab and regional countries and Europe in this direction "He said.

He pointed to "the importance of adopting a serious and constructive dialogue to solve all problems and to give preference to the participants to differences, and to refrain from the policy of axes."

For their part, the ambassadors of the three European countries expressed their satisfaction with the development of relations with Iraq and the efforts of their countries to consolidate and increase cooperation, praising the balanced foreign policy of Iraq and the role it plays in its Arab and regional environment.

The ambassadors reiterated "the desire of their countries to contribute to the reconstruction of Iraq and to seize investment opportunities for European companies looking forward to work in the country," pointing out that "the views of the two sides on the crisis in the region and the importance of defusing it.

Page 1 of 1
Permissions in this forum:
You cannot reply to topics in this forum
Who is online?
In total there are 157 users online :: 2 Registered, 0 Hidden and 155 Guests :: 3 Bots