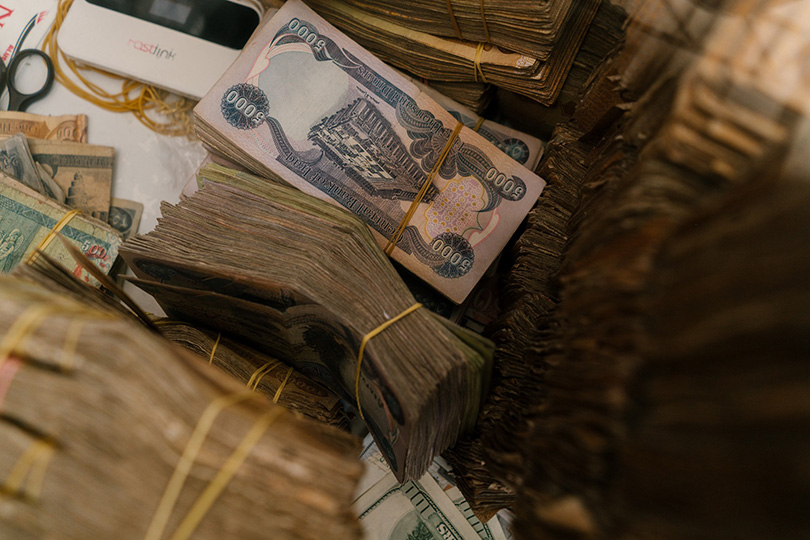 The compactness is a general phenomenon in Iraq, as most citizens accumulate their money in their homes without investing in productive projects that reflect positively on the reality of the Iraqi economy, for many reasons behind this phenomenon, most notably the absence of investment climate and weakness of the banking system and the error of the process of transformation and dominance of the state and low awareness of banking.

And the banking system

There is a close relationship between the compactness and the banking system, the more the banking system is a sophisticated in its performance whenever it can reduce the phenomenon of compactness, and vice versa when the performance of the banking system is modest will increase the volume of compactness.
One of the most prominent signs of the development of the banking system is its ability to attract savings and channel them towards real investment channels. The more it is able to attract savings through achieving the banking density, which means the number of banks in terms of number of people and the financial coverage, which means that all members of the community get banking services to meet their needs. Every place and time with high quality and favorable prices, directed towards investment will be able to absorb compactness.
The ratio of the standard banking density in the world is one branch to serve every ten thousand people, and as the ratio of banking density in Iraq is one branch for every 35,500 people in 2016, which means low banking density in Iraq, which resulted in low financial coverage where The rate of 11%, a modest percentage compared to the rates achieved by many foreign countries and Arab and neighboring countries, according to the adviser to the Central Bank of Iraq and the agency Walid Abdul Nabi. The fall of the banking system was one of the reasons behind the prevalence of the phenomenon of compactness in Iraq.

The process of transformation and state domination

Iraq's abrupt, random and dual transformation of dictatorship into political democracy and from socialism to the market and economy has contributed to the widespread political and economic chaos that has been reflected in the security situation that has cast a shadow over the banking sector, so that a large part of the borrowers can not repay their debts with due dates, Confused the work of banks and reflected negatively on their liquidity, as pointed out by the Union of Arab Banks.
At the time that Iraq adopted the new regime, which is supposed according to this adoption that the state withdraw from the economy, including the banking sector, but it still has the lion's share in the banking sector, where the Union of Arab banks, despite the increase in the number of private banks operating in Iraq, And its activity is very limited compared to government banks that manage about 91% of the total assets of the banking sector, while private banks run 8% of them and foreign banks manage only 1%.
Rafidain Bank, the largest government bank, controlled 51% of the banking sector assets in 2013, 47% of its deposits and 45% of credit facilities. The market share of the two largest banks, Rafidain Bank and Rasheed Bank, accounted for 75% of the total assets of the sector, 73% of its deposits and 64% of loans at the end of 2013. In conjunction with widespread corruption in most state institutions, including the banking sector.
The private sector in Iraq does not have a long history in the banking sector and with the opening of the door in 2003, but it is still limited performance because of the error of the process of transformation in Iraq, which was not studied and was random, so the private sector in general and in the banking sector in particular Citizen confidence.
With the continued dominance of the state on the banking sector and a large proportion and limited role of the private sector and the absence of competition and the infiltration of corruption to the private banking sector and government will continue to suffer from the sector lagging behind, citizens will not accept to deal with him and therefore prefer to hoard their money in their homes, When the compactness accounted for 77% of the volume of the currency exported outside the Central Bank of Iraq, as well as hard currency in foreign currency, according to the economic and financial adviser to the government appearance of Mohammed Saleh.

There is a close relationship between the compactness and the banking awareness of the public, sometimes it is an inverse relationship, ie, the higher the level of the banking awareness, the less the volume of compactness, and the other is a direct relationship.
In view of the low banking awareness among the Iraqi public, which was evident through the low dealings with banks, where the Union of Arab banks to 80% of the population of Iraq do not have a bank account, the low banking awareness reflected the size of the compactness, which formed 77% of the currency outside the Central Bank.
After identifying the most important reasons behind the phenomenon of compactness, it is necessary to mention the most important steps that contribute to addressing this phenomenon:
First: Building an investment climate that is capable of attracting investment and stimulating the local investor in particular so that he can absorb the compactness.
Second: Working on developing the banking system and raising its performance by increasing the banking density and achieving financial coverage, which encourages citizens to save their money in banks.
Thirdly: the withdrawal of the state from the banking sector gradually and keen to find the element of competition because competition can improve the quality of banking services and lower costs.
Fourth: Raising the banking awareness among the public on the importance of dealing with the banking system and how to reflect its positive effects on it and its society and the economy of his country.
Fifth: Reinstate the confidence of the citizen in the banking system through real procedures that protect citizens' deposits from corruption and how they contribute to increase them and feel any new decisions that contribute to the development of their funds.