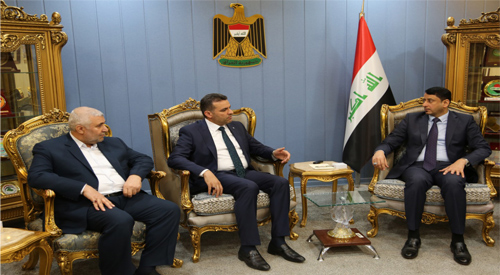 The Secretary-General of the Council of Ministers, Hamid Naim al-Ghazi, praised the role of the Shiite Endowments Bureau in promoting religious and national unity and renouncing sectarianism, based on its association with the supreme authority in Iraq.

This came during a meeting with the deputy head of the Shiite Waqf office d. Abdul Ghani Al-Kikani and a number of General Directors of the Waqf.

The Secretary-General pointed to the importance of reviewing many of the social emergency issues, by taking the Waqf role in the educational, cultural and awareness, stressing his readiness to support the Shiite endowment and lifting the obstacles that prevent the taking of this role.

For his part, Abdul-Ghani Al-Kikani directed the Waqf to resolve the files related to the suspended lands in Baghdad and the provinces. On the other hand, Al-Kikhani pointed out that the Waqf established several religious schools in Iraq.

He also reviewed the most important specialties of the Imam Al-Kadhim College of the Waqf, as well as other charitable projects that he adopts.