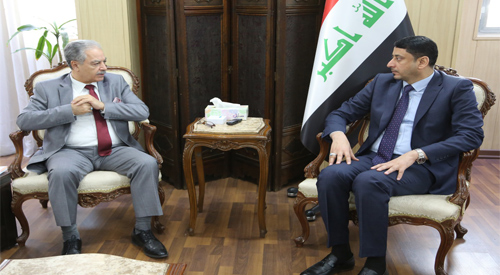 The Secretary-General of the Council of Ministers, Mr. Hamid Al-Ghazi, discussed with the Head of the Reconstruction Fund for the affected areas, Mustafa al-Hitti highlighted the latest developments related to the file of the restoration of stability and reconstruction, stressing the importance of extraordinary efforts in the implementation of projects related to this file and turn it into reality touched by citizens.

During the meeting, the Secretary-General referred to the need to follow up on the international commitments and pledges made at the Kuwait International Conference. He called for a close meeting to evaluate the projects, determine the benefits of the loans and a list of the size of the damages and their classification by sectors and implementation priorities.

Al-Hiti presented a detailed report to the Secretary-General, which included all the projects under the work of the Fund, as well as the amounts of grants and loans agreed upon and a schedule of transfer and implementation times to reach completion rates.

The meeting also discussed the mechanism of the World Bank's work in the management of grants to the Fund for Recovery and Reconstruction of Iraq jointly between the Fund and the Ministry of Planning, the mechanism for the delivery of grants and disbursements, which was approved by the Council of Ministers and gave priority to projects to restore infrastructure.

Page 1 of 1
Permissions in this forum:
You cannot reply to topics in this forum
Who is online?
In total there are 192 users online :: 2 Registered, 0 Hidden and 190 Guests :: 3 Bots