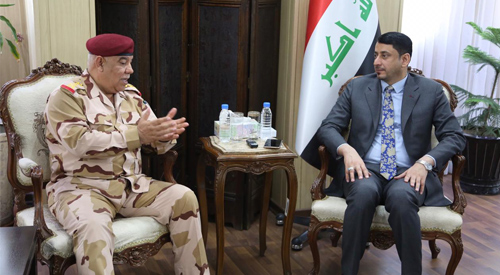 The Secretary-General of the Council of Ministers, Hamid Naim al-Ghazi, stressed the importance of continuing coordination between government institutions to achieve security stability in the capital Baghdad and the provinces of all countries and reduce the negative phenomena in Iraqi society.
The Secretary-General during his meeting with the Baghdad Operations Commander Lieutenant General Jalil al-Rubaie

The need to do more to address a number of files that relate to the daily life of citizens and the legislation of laws that limit them, most notably the fight against drugs, calling at the same time the relevant security agencies and the Ministry of Health and civil society organizations to take their role in the elimination of this scourge that threatens the community security.

The two sides discussed the requirements to achieve the stability of security especially the areas of the outskirts of Baghdad and to ensure the return of displaced persons and normal life in those areas. As well as the implementation of the directive of Mr. Prime Minister to open the streets of the capital Baghdad, which was closed after 2003, and invest this guidance in addressing the crisis of traffic and traffic jams.

The commander of operations called on the Ministry of Interior to take urgent measures to deport the old vehicles, as this measure will contribute to easing the momentum. On the other hand, al-Rubaie pointed to the great achievement achieved by the Baghdad operations in reducing the phenomenon of tribal dikka, The arrest of the arms carrier in accordance with the Terrorism Act.