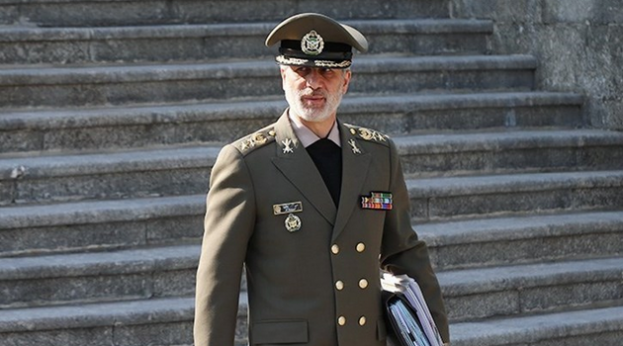 The Iranian defense minister called for the enhancement of military and defense cooperation with Iraq, saying collaboration between the two neighbors would serve regional security and stability.
In a meeting with a delegation of Iraqi military commanders, Brigadier General Amir Hatami said the common threats and opportunities necessitate closer consultations between Tehran and Baghdad for protecting the interests of the two nations and ensuring regional security and stability.
Highlighting Iran’s contribution to stability and safety of Iraq, the general said the Iranian and Iraqi forces’ devotion guarantees security in both countries, adding that Iraq would have disintegrated without steadfast cooperation between the two neighbors.
Defense cooperation between Iran and Iraq results in balance, peace, stability and security in the region, General Hatami stated, adding that the two sides are determined to broaden ties.
In a meeting in Tehran on Wednesday, Commander of Iraq’s Navy Major General Ahmed Jasim Maarij and Commander of the Islamic Revolution Guards Corps (IRGC) Navy Rear Admiral Ali Reza Tangsiri discussed enhancing military cooperation and holding joint naval programs between the two neighbors.
In July 2017, Iran and Iraq signed an agreement to boost military cooperation in a host of fields, including counterterrorism.
Based on the deal, Tehran and Baghdad try to promote interaction and share experiences in the fight against terrorism and extremism, work together to ensure border security, and provide each other with training and logistical, technical and military support.
(Source: Tasnim, under Creative Commons licence)

Similar topics
» Oglu begins visit to Iraq tomorrow includes three provinces
» Iraq will be affected by the sanctions against Iran On: Saturday 02/04/2012 11:23/ Iraq eyes waiver, worried over reserves Reuters
» Iraq and US confirm their continued military cooperation
»  Ministry of Oil: Any measure to increase oil production will not be monolithic
» Defense Minister discusses with the Italian ambassador in Iraq military cooperation and training of security forces