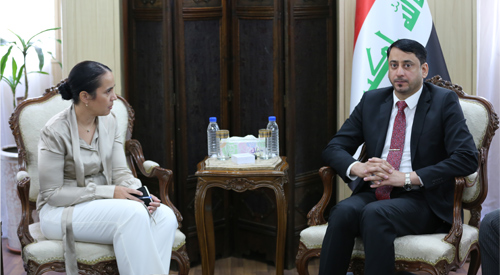 The Secretary-General of the Council of Ministers, Mr. Hamid Al-Ghazi, received the Ambassador of New Zealand in charge of Iraq, Mrs. Tredin Topsen, who congratulated him on the occasion of assuming his new position.

The Secretary-General welcomed Ms. Tobsen, praising the role of New Zealand as an effective member of the support for Iraq, pointing out that this support should continue during the current phase (recovery phase), especially that Iraq and after the stability of security and political policy of openness to all countries of the world, , Trade, industry, construction, investment, agriculture and mine clearance are among the government's priorities as well as stability and the return of displaced people.

The Ambassador stressed her serious efforts to expand the cooperation frameworks with Iraq, as well as the effective contribution to support the stability, community building and military training by the New Zealand Forces, and hopes to expand the diplomatic relations between the two countries and stressed the desire of many companies to work and invest in Iraq.

For his part, al-Ghazi said that Iraq's environment today is safe and attractive environment for investment, and Iraq welcomes international companies to work and invest.