Information / Baghdad ...
The commander of the US Central Command, General Kenneth McKenzie, said Saturday that his country's combat forces will be in the territory of Iraq long-term, between the US forces will withdraw from Syria gradually.
"We are confident that our presence will be long-term in Iraq, and our presence in Iraq is to combat terrorism," McKinsey said in an interview with Sky News. "The best long-term solution to groups such as" Effective local security ".
"In the long term we will reduce the number of our troops in Syria, and this will be done with caution," he said.
The political blocs have announced, on Saturday, its intention to host the Prime Minister, Adel Abdul Mahdi and security leaders on US interventions in Iraq. End 25 T 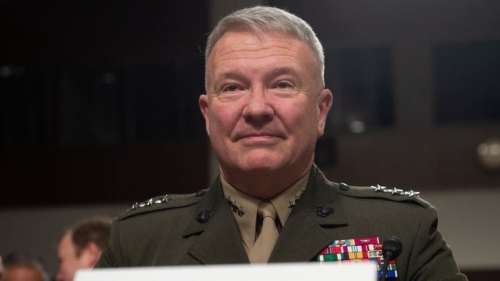 [ltr]
US Central Command chief Kenneth Mackenzie expressed his conviction that the presence of the United States in Iraq will be "long-term," noting that Washington is currently conducting negotiations in this regard, [/ltr]

[ltr]"Iran's export of terrorism in the region and the world is a long-term threat," McKinsey said in an interview with Sky News Arab television during a visit to the Gulf. "The presence of the United States and the (central) And we will continue to live in this region, and we will continue to communicate with our regional allies and friends.

McKinsey referred to the Syrian file, stressing that the US leadership is careful to reduce the number of troops in this country, "with the progress forward."

The general pointed to the importance of balancing the needs of Washington's allies, such as Turkey, and their security requirements in the north of Syria, and the US attempt to protect the mechanisms established by Washington to be long-term there, referring to the "Kurdish Democratic Forces".

The commander of the US Central Command expressed his conviction that the presence of the United States in Iraq will be "long-term" with a focus on combating terrorism, stressing that Washington is currently in negotiations.

"The United States is helping Iraq build its institutional capacity," he said. "Any solution in this country should respect its sovereignty and be done through an agreement with its government."

The general stressed that everything the United States is doing in Yemen is directly linked to the operations against al-Qaeda in the Arabian Peninsula and "Al-Qaeda".

"We offer limited support to our partners, our friends, the Saudi-led Arab coalition, in their operations, but we do not share them in combat operations, and we do not directly support them in the fighting," he said. [/ltr]

Page 1 of 1
Permissions in this forum:
You cannot reply to topics in this forum
Who is online?
In total there are 107 users online :: 0 Registered, 0 Hidden and 107 Guests :: 3 Bots