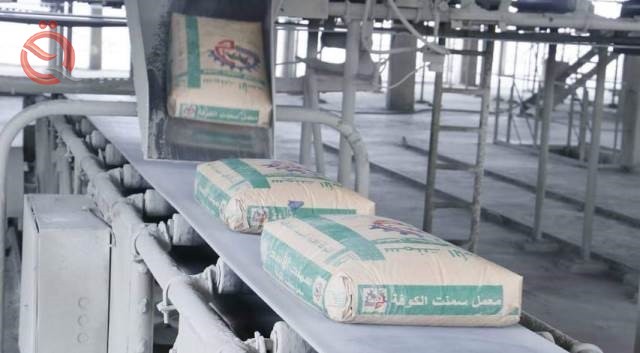 The Ministry of Industry announced on Monday that the Kufa Cement Factory in the Southern Cement Cooperative Company of the Iraqi General Company for Cement has managed to produce and market quantities of 135,000 tons during the past three months of this year, while maintaining the maintenance and rehabilitation of some of its production departments Especially the furnace department.
"The factory continues to produce and supply cement by achieving 66% of the plan since the beginning of this year because there is a rehabilitation in the furnaces department due to the aging and consumption of the main gear," said Samir Sami Abdul, director of the lab, in a statement issued by the ministry's media office. Rehabilitation and maintenance of new ones by buying, especially after 40 years of construction and operation of the plant, "noting that" Kufa cement plant was a race to provide cement in the beginning of the eighties and nineties and even after the events in 2003 and is known for the quality and quality of production He was counted The factory is a brand for the manufacture of cement and has contributed significantly to cover the need and provide hard currency after the issuance of the decision to ban the import of cement. "
He pointed out that "the lab consists of four ovens 1500 tons per day per kiln and the rehabilitation plan includes only two kilns to reach 90% of the design capacity during this year."
"The factory managed to maintain the sale price of the cement product so as not to affect the customer despite the high prices of selling black oil supplied to him during the past year and caused a significant increase in production costs because the plant works in a wet way and consumes double quantities of black oil, The private sector, which operates in the dry way and consumes up to half of the consumed by government laboratories, "He said that" there is a preference and discrimination in terms of government subsidies to the government sector plants in terms of fuel prices to enable them to achieve profitability and increase capacity as an old factor and owns DAD is a large workforce and produces high-quality cement with higher specifications than the Iraqi standard (27%). This leads to an increase in production costs and the addition of additional costs. "
He pointed out that "the lab goes three axes in parallel through the use of gas fuel at 50 dinars per cubic meter and the rehabilitation of productive sections in a way to participate with specialized companies to provide cash for rehabilitation and obtain a government loan for the construction of a new line works with modern technology and a card equivalent to the capacity of the plant within the framework of the plan to develop Work environment and double production to keep the Kufa cement brand a pride for the Iraqi industry. "