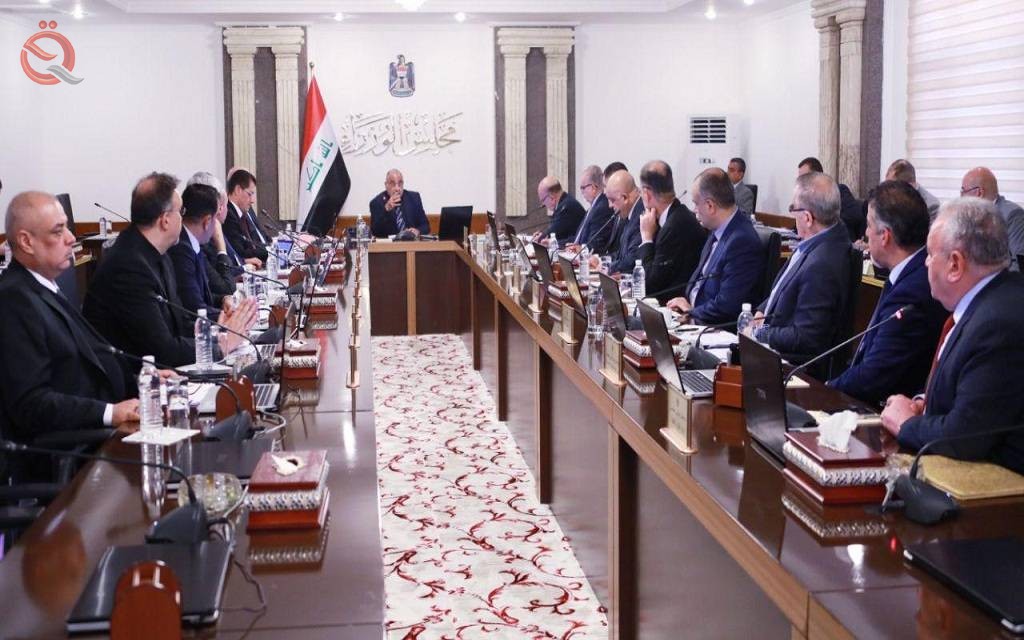 Part of the Iraqi cabinet meeting

The Council of Ministers adopted at its meeting last Tuesday, 10 resolutions.

The Cabinet said in a statement read by "Economy News", that the meeting was re-presented the subject of the plan stages of implementation of the General Population and Housing Census again on the Council of Ministers and agree to set a date in 2020.

It was agreed to exempt the families of the martyrs from those who exceeded the social protection benefits from the amounts of those benefits.

The draft amendment to the Third Law of the College of the Grand Imam No. (19) of 1997 was re-introduced to the Council of Ministers.

The Council decided to cancel the Cabinet Resolution No. (123) for the year 2018 and the Diwani Order (34 of 2018) regarding the formation of the operations room of the General Secretariat of the Council of Ministers.

The meeting witnessed the approval of the resumption of work to complete the Umm Qasr water project by the executing company.

The allocation of 30% of the fees and fines collected to support the social protection fund of the Ministry of Labor and Social Affairs was re-introduced to the Council of Ministers.

The Council approved the recommendation of the Ministerial Council for Energy on the dry gas pipeline (Oil of Baghdad) / the Iranian line, in addition to the conclusion of a new lease with the company control group risk limited CRG

The recommendation of the Central Judiciary Committee of the Supreme Judicial Council regarding the write-off of furniture and expendable assets and the Ministry of Health and the Environment was approved for the removal of ambulances belonging to the Basra Health Department and the Ministry of Transport.

Page 1 of 1
Permissions in this forum:
You cannot reply to topics in this forum
Who is online?
In total there are 126 users online :: 1 Registered, 0 Hidden and 125 Guests :: 3 Bots

Most users ever online was 2065 on Mon Apr 09, 2012 5:34 pm
Latest topics
» Al-Kazemi: We are working on preparing the infrastructure to revive the Iraqi industry