Barzani reminds Abadi, 'Mosul wouldn’t have been liberated without Peshmerga'

Barzani reminds Abadi, 'Mosul wouldn’t have been liberated without Peshmerga'


Barzani reminds Abadi, 'Mosul wouldn’t have been liberated without Peshmerga' 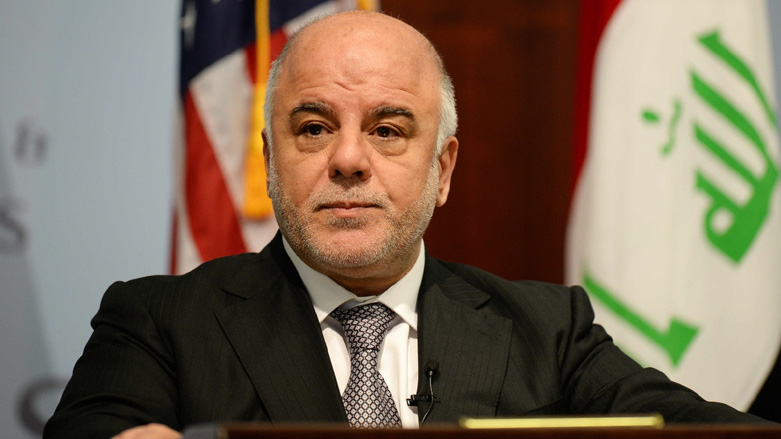 ERBIL (Kurdistan 24) – The former prime minister of Iraq and the head of the Nasr (Victory) coalition in the Iraqi Parliament, Haider al-Abadi, wants to destroy the constructive environment between Erbil and Baghdad following last year’s Iraqi elections, Masoud Barzani said on Tuesday.
Barzani’s response came following Abadi’s recent interview with Iraq’s Al-Dijlah television channel on Saturday where he spoke about different topics in the country, including the Peshmerga, Kurds, and Kirkuk.
Barzani, the President of the leading Kurdistan Democratic Party (KDP) and former President of the autonomous Kurdistan Region, described Abadi’s remarks on Kirkuk, Peshmerga forces, and the people of the Kurdistan Region as “inappropriate.”
“The purpose of those comments are personal and meant to destroy the positive environment that has evolved between the Kurdistan Region and Baghdad following the Iraqi elections,” the senior Kurdish leader said in a statement.
He mentioned that during Iraq’s May 2018 parliamentary elections, the components in the country “punished” Abadi and all those who intended to spark a civil war, destroy the coexistence, violated the constitution, and committed crimes in Kirkuk and Tuz Khurmatu. He referred to Abadi’s electoral list which failed to gain the majority of votes needed to secure the former prime minister’s second term in office.
On Oct. 16, 2017, Iraqi forces and Shia-dominated militias attacked and took over Kirkuk and other disputed territories. Peshmerga withdrew from those areas with no major clashes to strengthen their lines and defend the Kurdistan Region.
During the Sept. 30, 2018, regional parliamentary elections, the people of Kurdistan rewarded Peshmerga and all the defenders of the Kurdistan Region, Barzani said, referring to the result of the polls which increased the KDP’s number of seats from 38 to 45 in the 111-seat parliament for standing up against Iraq’s Oct. 16 attacks.
“Abadi was a disloyal person toward the Peshmerga and the people of Kurdistan,” he continued.
“If it were not for the Peshmerga, a person like him [Abadi] would never have been able to visit Mosul to steal the success over Da’esh [ISIS] and use it to promote himself.”
Barzani currently holds no official governmental post but continues to remain an important Kurdish political figure in the Kurdistan Region and Iraq.
He stressed that the Peshmerga forces “engraved” Abadi’s plans to attack the Kurdistan Region just as they had done in the past against other enemies and former Iraqi regimes.
“Abadi himself knows more than anyone else what Peshmerga did to him and his plans.”
In the past, senior Kurdish leaders have said Abadi’s military attack was not meant to control the disputed territories alone, but also the Kurdistan Region as an entity.
Barzani praised the current positive ties between Erbil and Baghdad and noted that “spiteful faces and egoistic rule breakers should not have any role in” Iraq which is in a different situation compared to a year ago.
“The current phase is a phase of responsibility, strengthening the principles of coexistence, rooting partnership, consensus, and balance in Iraq,” he noted.
Since Iraq’s current Prime Minister Adil Abdul-Mahdi took office in October 2018, relations between the Kurdistan Regional Government (KRG) and the Federal Government of Iraq have considerably improved.
Editing by Karzan Sulaivany

ERBIL - Prominent Kurdish leader and former president of Kurdistan Region, Masoud Barzani, has criticized Haider al-Abadi over his recent remarks about Kurdistan Region, Peshmerga forces and Kirkuk, saying that Abadi hopes to damage the relations between Erbil and Baghdad.
During a recent interview with Dijla news channel, Haider al-Abadi, the leader of a political faction in Iraq’s parliament and the former prime minister of Iraq, defended his government’s harsh and retaliatory measures agains the people of Kurdistan Region after 2017’s independence referendum. Back then, he moved a massive army, backed by the pro-Iranian Shi’ite militias of Hashd al-Shaabi, to attack the Peshmerga forces in Kirkuk.
He argued that the move was appropriate as “a group” within the Patriotic Union of Kurdistan (PUK) coordinated with Baghdad to hand over Kirkuk “without bloodshed”. However, the PUK faction’s cooperation with Baghdad was viewed by the people of Kurdistan as a national treason.
“Unfortunately, [Haider al-Abadi] made some remarks and judgements about Kirkuk, Peshmerga and the people of Kurdistan which could be understood as an attempt to destroy a positive environment created between Erbil and Baghdad after the [parliamentary] elections in Iraq,” Barzani’s headquarter said in an official statement on Tuesday.
It believes that Abadi’s remarks were made “to serve his personal interests” only.
“It is clear to everyone that the components of Iraq, during the last elections, punished Abadi and all those who planned a civil war, disrupt coexistence, violated the Constitution, committed crimes in Kirkuk and Tuz Khurmatu, and those who were spiteful to the people of Kurdistan,” reads the statement.
It described Abadi as “unfaithful” to the Peshmerga, reminding that without the Kurdish forces, Abadi would have never had the chance to overcome the Islamic State (IS) and visit Mosul again, and, also, use the victory to show off on a personal account.
During the interview, Abadi described the Kurds who voted “Yes” to Kurdistan Region’s independence referendum as “extremists”, and said he did not lose the hearts of the entire Kurdish people, “but of only those who voted for the referendum”, which was 92.73% of the total votes.
“Those described as ‘extremists’ by Abadi, are respected by the people of Kurdistan. Those who cooperated with Abadi, are traitors.”
The statement goes on as saying that the Peshmerga forces of Kurdistan nipped former regimes’ conspiracies in the bud with their courage and bravery, and “Abadi knows better than anyone what the Peshmerga did to him and his plot”.
“Everyone should known that a new environment has emerged now that does not let spiteful and selfish faces to have a role. This stage is for shouldering responsibilities, developing the principles of coexistence, and implementing partnership, consensus and balance in Iraq,” the statement concluded.

Page 1 of 1
Permissions in this forum:
You cannot reply to topics in this forum
Who is online?
In total there are 150 users online :: 1 Registered, 0 Hidden and 149 Guests :: 3 Bots