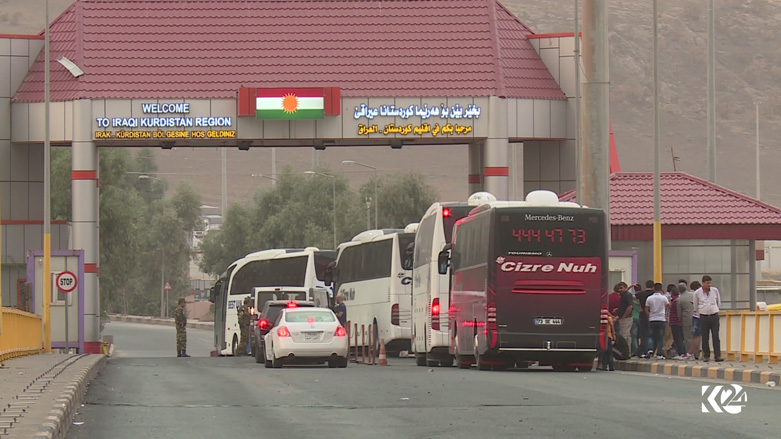 ERBIL (Kurdistan 24) – A Turkish delegation led by Deputy Foreign Minister Sedat Onal visited the Kurdistan Region on Wednesday to discuss bilateral trade, investment, and current developments in the country with a senior Kurdish official.
The delegation met with Chancellor of the Kurdistan Region Security Council (KRSC) Masrour Barzani, who is also set to become the new prime minister of the autonomous region for the next four years.
“Both sides expressed their readiness to increase bilateral trade and investment, in particular, in the energy and transportation sectors,” the KRSC press office said in a statement.
Over the past decade, Turkish companies have dominated the Kurdistan Region’s economy and have become their primary trading partner with almost $10 billion worth in annual trade between both sides.
Turkey and the Kurdistan Region have already started preparations to open a new border crossing.
Chancellor Barzani urged Onal to play a stronger role in the reconstruction of areas cleared from the Islamic State.


Following the military defeat of the extremist group, announced by Iraq in December 2017, the Kurdistan Regional Government (KRG) stepped up efforts to re-boost investment and its economy, which were affected by the fight against the Islamic State since 2014.
They also reviewed developments in Iraq and the Kurdistan Region, including the next KRG cabinet and the situation of disputed territories, the KRSC statement added.
Barzani stressed the need to normalize those areas to give locals an opportunity to manage their security in coordination with the KRG and the Federal Government of Iraq.
The administration and control over disputed areas have been one of the crucial disputes between Erbil and Baghdad over the past decades. The oil-rich and ethnically diverse province of Kirkuk, in particular, is at the heart of differences between the two sides.
Kirkuk is made of Turkmens, Arabs, and Christians with a Kurdish majority.
After the Islamic State’s emergence in 2014, Kurdish Peshmerga forces protected Kirkuk until October 2017 when Iraqi troops and Shia-dominated militias advanced to take over the area, pushing Peshmerga out of the province. The military offensive came weeks after the Kurdistan Region’s independence referendum which saw a landslide majority (93 percent) favoring statehood.
Following the formation of the new Iraqi government headed by Prime Minister Adil Abdul-Mahdi in October 2018, Erbil and Baghdad have been in talks to resolve their differences peacefully.
Editing by Karzan Sulaivany