F.B.I. vs anyone using "RV" claims

F.B.I. vs anyone using "RV" claims

This is about the Sterling Group case, yes, but notice the wording. I imagine similar questions could be asked about other things, such as...

Of course, I shouldn't think anyone would actually be silly enough to repeatedly demand that listeners make donations for intel, charitable causes etc., whilst constantly holding out the possibility of an imminent "RV"...would they?

There may well be an "email going around" but this is not it. This is a direct quote from the official FBI website (fbi.gov). Of course, dinar gurus and scammers would like people to believe that it's "just an email".
*****************

Assuming this information is current and correct, Rhame, Tyson and Bell and due to be sentenced 5/8/19.  Filling out this form gives the Judge input as far as the damage they did to their customers.  I don't understand why people who were a victim of Sterling's scam wouldn't want to see them put away for as long as possible.

Please see the attachments below for the Victim Impact Statement to complete before March 31, 2019. You can advise the court about your thoughts on the sentencing of the defendants and about your losses on this form."

Bumping this in the light of today's post by Mountain Goatee. Becky McGee and her like base their whole operation on promoting the fictional "Dinar RV" - something that both government agencies and reputable financial analysts have identified as a scam.
*****************

Here's what the DOJ stated in the indictment of the BH Group back in 2012.  Notice that they consider it fraud to misrepresent the CBI's proposed currency reform as a revaluation rather than a redenomination.

"7. The term "revaluation" (casually shortened to "RV" in dinar-sales parlance), refers to the contention that at some point in the near future, the dinar will rise against the U.S. dollar, a circumstance which will enrich earlier purchasers of the dinar.  BRADFORD HUEBNER, CHARLES EMMENECKER, RUDOLPH COENEN and MICHAEL TEADT repeatedly advanced claims to potential investors over the telephone, through web pages, and through a weekly internet conference call that even relatively small investors in the dinar would, following the "revaluation" or "RV," become wealthy overnight.
8.  A "redenomination" of the dinar refers to an actual proposal by the Central Bank of Iraq, announced as recently as June 21, 2011, to re-print the currency to remove three zeroes from the physical dinar banknotes as a matter of convenience.  A redenomination of the Iraqi currency would not lead to a revaluation by the same amount, and may have no effect on the currency's value.  Under a redenomination, a new currency replaces an old currency, but the value remains the same.  Under the proposed redenomination, the Iraqi government would issue a new dinar note that will be equivalent to 1000 current dinars.  The exchange would be 1.17 new dinars to the dollar, equivalent to 1,170 current dinars to the dollar."
*****************
Busting Gurus Since 2011

Pretty outlandish for the DOJ or FBI to make such a statement since they are not in the business of banking or monetary policy. Taking this kind of leeway with the potential outcome is outlandish.  Even if it is clearly written, it by no means is absolute.  A good lawyer would challenge this and succeed.

@Muskie wrote:Pretty outlandish for the DOJ or FBI to make such a statement since they are not in the business of banking or monetary policy. Taking this kind of leeway with the potential outcome is outlandish.  Even if it is clearly written, it by no means is absolute.  A good lawyer would challenge this and succeed.

In a normal case the DOJ would have had to obtain the services of an expert witness to validate those claims.  However in the Sterling case, there was no need because there are emails from the three defendants that state they know the IQD RV is a scam. 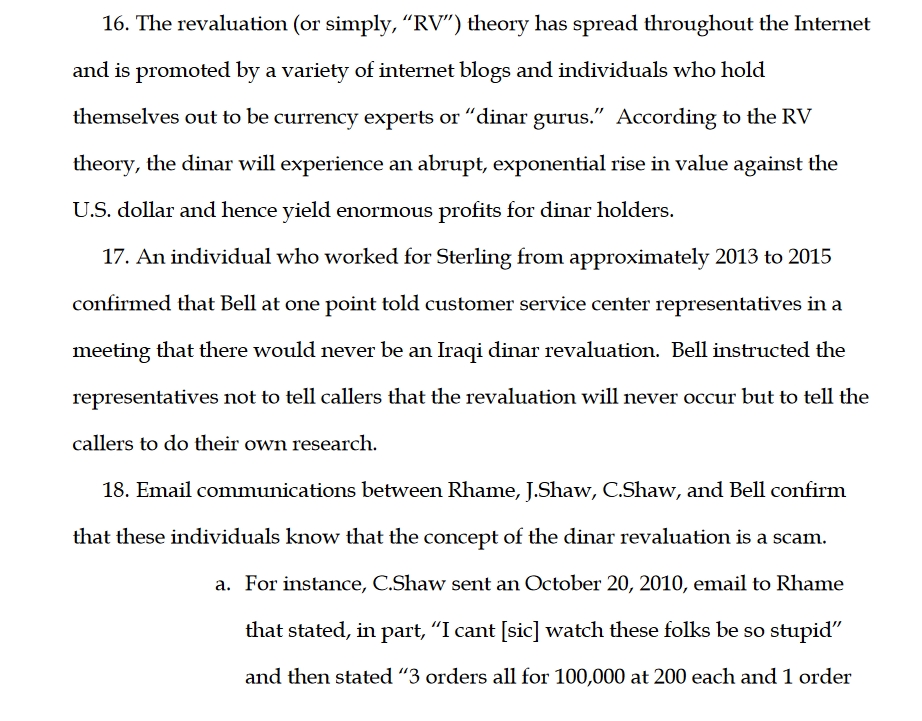 Attorneys don't like to lose, and they don't like to have the conviction overturned after they win.  If there was any chance that this big RV could happen and be used as grounds for overturning the conviction they would have left that out of the indictment.  I'm sure they consulted with economists and government officials to make sure that they had their facts right.  This is one of the things that gave me so much confidence in blogging against the scam 6 years ago.  The BH Group indictment just validated everything that I had been saying during the first year of my blog.
*****************
Busting Gurus Since 2011

It is also worth noting that the FBI has forensic accountants and the like on staff. They actually have a lot of expertise in things financial. My Uncle was one with the NJ State Police and worked with the FBI frequently.
*****************
Trust but Verify --- R Reagan

Page 1 of 1
Permissions in this forum:
You cannot reply to topics in this forum
Who is online?
In total there are 69 users online :: 1 Registered, 0 Hidden and 68 Guests :: 4 Bots