Sam I Am: The rest of what Kap wrote is no better than his first three paragraphs. The IQD will never free float until they have moved away from an economy that is 90% oil based to a western style diverse economy with strong manufacturing, agricultural, and service sectors. This will take decades if it ever occurs, and by then the IQD and many of us will be long gone. A much more likely scenario would be a slow, gradual devaluation like we see in Vietnam. As Iraq develops other sectors of their economy and exports more goods they will probably want to lower the value of their currency to attract buyers. Again, this is how it works in the real world.

Sam I Am: I can provide links to support my numbers but I suspect that your mod will remove them

Thanks for posting that, Nash.  Just for context here's what Kap said that I responded to.


"Many think the dinar could never free float and must be some sort of manage float. They may be right! I am do not really care what type of float it is other than that is how monetary policy works, floats are a tool that the CBI uses to counter pressure. Random acts like RV's RI's etc are not tools the CBI uses so we can rule such an event out. As well there are other reasons like money supply, economic shock that prevent such an event from ever happening.


If they do float (which they will) the float will begin at whatever the current rate is at..such as 1190. The reason is simple...any other value would be a RV of sorts and not be within the tools the CBI uses. Not to mention, it would circumvent the CBI's ability to profit from the buy/sell of currency commissions. Which after all, is what the CBI is in the business of..making money. Central banks every single day control the sale of their currency to make money.


As for how fast the dinar could rise...just look back at 2004-2005 when the CBI under Dr. Shabibi unpegged for about 6 months and reduced inflation from about 33% to 5% or less raising the dinar exchange rate from near 3000 / $1 to 1170 /$1. This demonstrates the pace the dinar once again could have during the investment/market economy phase. But again, this process is up to how fast investors/investment comes to Iraq. It is not a random act. Again, many articles on this process to read from the IMF and other organization.

Cost of printing currency is consistent no matter what the dinar exchange rate is because Iraq uses Dollars to pay for goods outside Iraq at this time. So the cost of printing a 25,000 note is the same cost as printing a 20 note if they have printed them and the paper/features are similar. Same for any coin/fils. But from news we have read over the years, it appears those are already minted."


"Members need to understand, primarily the dinar is only used in Iraq. Purchases outside Iraq are in dollars so they are on par with the rest of the world as for costs. Iraq does not print or mint their own currency. It is sourced to companies such as De La Rue. This is done to prevent overprinting and eliminating concerns over security.


I remind you most if not all of your chat people refuse to study and read how emerging market work. There are several documents/articles explaining this process they can read if they want to really learn, but most do not because they believe the crap from the gurus.

Remember this is not some idea I came up with. The professionals at the IMF that work directly with Iraq have documented that is their intention for the CBI and the dinar. Your members need to stop listening to nonsense from gurus and start reading the profession documentation pertaining to Iraq for the truth on this investment.

There are two ways to interpret what the CBI is talking about when they mention "deletion of zeros. It may be honest and part of the plan (when they interpretation of what they really mean applies) or it may simply be the CBI trying to diffuse speculation and speculators from buying the dinar. There is no way to know for sure until they open the economy and we find out.


I have read articles that imply deleting 3 zeros is a LOP and others that imply that they will raise the value gradually down to the day the dinar is worth the same as the dollar. which implies a float and exchange rate improvement."


Personally, I believe from my research the dinar will improve in value via float and that seems to coincide with Dr. Bakri in Iraq who has written me several times to discuss monetary policy (which is posted in DinarAlert Forums).


So also want to hold on to a statement from an article that said they would not float the dinar. Which also could be interpreted in two ways. 1. being they won't float (which makes no sense because they then would not have the tool they need to counter inflation as investment/investors come to Iraq, or 2. they are not going to float at this time (which may be what they really meant at the time of the article). And may be true..but that was months ago before the dinar was stable and in compliance. It is almost amusing how "literal" some people get with every article released.


"Sam is taking what I said and twisting it to imply I said Shabibi free floated back in 2004-2005. I never said that. What I said was that he unpegged. Which I should have been more clear..he did move off the peg at the time and went to a variation of another exchange rate regime (Sam called it a crawling peg). I do not agree with Sam's timeline, as the dinar was much weaker than what he states post war and the period of inflation reduction was from 2004-2005 not 2006-2009 as he says. We maybe talking about two different activities, I don't know. My point was simply that he raised the exchange rate substantially in a 6 month period. Which also could be accomplished this time with the new float regime during investment and price discovery. He is also wrong on the recent CBI devaluation 20015-2019 period. The rate 1190 has stayed the same since the imposed IMF mandate for "ease of monitoring" reasons. Yes, the CBI rate may have gone from 1184 to 1190 but that was just accepting the commissions into the rate which was always the case anyway (1186 + 6 dinar is 1190 or just calling it 1190 is the same result). There was no devaluation. I don't really have time to discuss semantics anyway. Kap"


Where did Kap go to school?


IQDCalls Mod wrote:
mod  Not that I am a genius and Not to "throw Kap under the bus" But Kap demonstrated to us in the past he did not know how to translate minutes to hours... LOL .. so not trusting him with numbers.

Okay, I just reread Kap's post and I see where the confusion comes from.  Kap was talking about 2004-2005.  I thought he was talking about the crawling peg period from 2006-2009.  I never heard anybody refer to an increase in 2004-2005.  The dinar appreciated rapidly after it was introduced in 2003 until they pulled some USD out of the market to stabilize it in 2004.  (It was a chaotic time during the transition phase and they were still putting the government and CBI together.)  From 2004-2006 it was stable, so I don't know what he's referring to.  At any rate (no pun intended) there was no free float or de-peg.
As for the value of the IQD when it was introduced in 2003 I would like to see any evidence that it was 3000:1.  That was the market value of the Saddam dinar in 1995 according to the CBI website, but Saddam set the official value at $3.20 or so.  When he was removed and the Coalition Provisional Authority introduced the IQD the value was set at about 1480:1.  (If the image doesn't show all of the numbers click on it to see the whole image. Better still, click on the link and see it on the Trading Economics website. You'll need to click MAX to go back to 2003.) 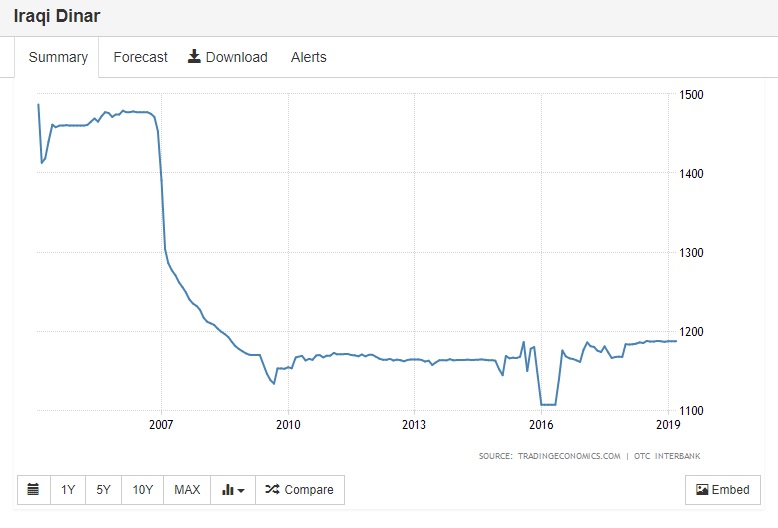 Then Kap claims that it's only semantics to say that going from 1184:1 to 1190:1 is a devaluation rather than just accepting commissions into the rate (whatever that means).  When the central bank raises the denominator to lower the value that is by definition a devaluation.  To say that it's just semantics is like saying that there's no difference between rain and hail because they're both water, so it's only semantics.  In economics and currency definitions matter.  That's one of the problems in the dinar world.  People don't care about definitions and facts.
*****************
Busting Gurus Since 2011

Page 1 of 1
Permissions in this forum:
You cannot reply to topics in this forum
Who is online?
In total there are 166 users online :: 3 Registered, 0 Hidden and 163 Guests :: 2 Bots

Most users ever online was 2065 on Mon Apr 09, 2012 5:34 pm
Latest topics
» Al-Bajari to NINA: Building a nuclear reactor in Iraq is a good idea, and Al-Kazemi must be serious about building it.