Al-Halbusi: Iraq has confirmed its international presence by communicating with the world

Al-Halbusi: Iraq has confirmed its international presence by communicating with the world


[size=36]Al-Halbusi: Iraq has confirmed its international presence by communicating with the world[/size] 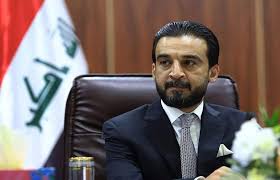 The Speaker of the Parliament, Mohamed Halboussi, Saturday, that Iraq confirmed his presence through communication with the world, and was able to achieve many achievements on the security level.
Al-Halabousi said in his speech during the official ceremony on the anniversary of the Martyr's Day and the martyrdom of Grand Ayatollah Sayyed Muhammad Baqir al-Hakim (martyr of the mihrab) and his follower (Mawazine News): "Despite these difficulties we have achieved a huge balance of achievements, including materialism, "He said.
He added, "We have to recognize that the completion of victory is not only reforms really paved the ground for a sound and strong achievement of the benefits of the future coming in response to the aspirations of citizens."
Halabousi stressed that "we are on the threshold of a qualitative stage of reform and renewal, and that we are in front of a stage to complete the martyr project."
He continued, "The race has been able to achieve many achievements at the level of security, and was able to prove his international presence through communication with the world and participation in international activities," noting that "Iraq has achieved this international presence through wide openness and the reception of the heads of the world in Baghdad."
The Speaker of the Parliament: "Iraq has also been able to find a place that suits him and the space absorbed by dialogue with the brothers in order to achieve greater openness through balanced diplomacy."

Page 1 of 1
Permissions in this forum:
You cannot reply to topics in this forum
Who is online?
In total there are 142 users online :: 1 Registered, 0 Hidden and 141 Guests :: 2 Bots

Most users ever online was 2065 on Mon Apr 09, 2012 5:34 pm
Latest topics
» New Deputy Political Affairs and Electoral Assistance appointed for UNAMI in Iraq