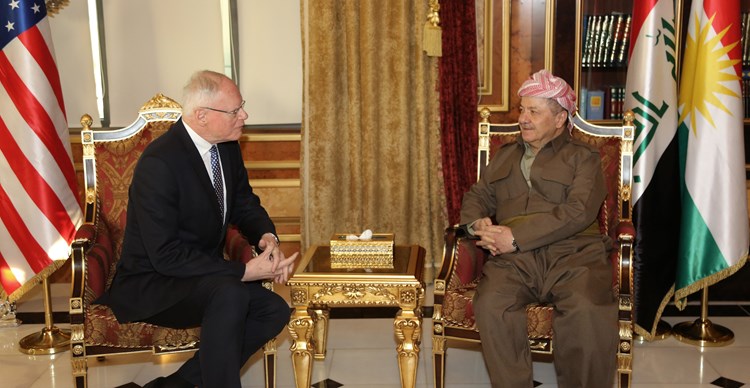 Salahadin, Kurdistan Region of Iraq, (Barzani Headquarters)- President Masoud Barzani received a United States government delegation which consisted of State and Defense Departments officials and was headed by ambassador James Jeffery, the Special Representative for Syria Engagement. The delegation also included Joel Rayburn, the Deputy Assistant Secretary for Levant Affairs. President Barzani and ambassador Jeffery spoke of the latest political developments in Iraq and the Kurdistan Region, they also discussed the military progress against the terrorists of the Islamic State and the general situation in Syria.
President Barzani expressed his gratitude to the people and government of the United States for their continuous support to the Kurdistan Region, adding that the war against the terrorists of the Islamic State would have indeed been more costly in terms of human lives and resources had it not been for the intervention of the U.S.-led coalition. Ambassador Jeffery made reference to the fact that the U.S. support to the Kurdistan Region has proven to be a successful endeavor and that the Kurdistan Region is one of the success stories in the Middle East.
The two sides discussed the political situation in Iraq and the recently enhanced relations between Baghdad and Erbil. Ambassador Jeffery and President Barzani expressed their optimism for a brighter future for Iraq and the Kurdistan Region following the war on the terrorists of the Islamic State.
The meeting also included discussions on the situation in Syria and how it is imperative for all sides to begin engaging in finding avenues which would be in the interest of the people of Syria following the end of the caliphate of the Islamic State.
While President Barzani acknowledged that the terrorists of the Islamic State have faced a serious defeat in Iraq and Syria, he added that their threat should continue to be handled with caution. 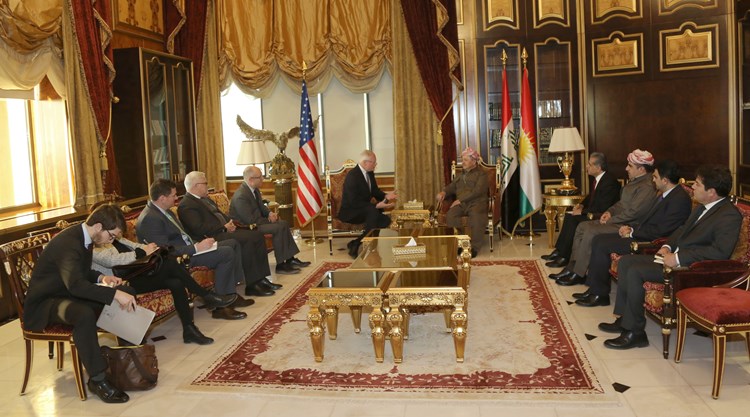