Zimbabwe’s central bank is considering devaluing its quasi-currency as part of a raft of reforms to the nation’s foreign-exchange system, according to a central bank official.

Depreciating the so-called bond notes would be an acknowledgment that the official one-for-one exchange rate is no longer sustainable. It would also mark the second major overhaul to Zimbabwe’s currency regime since October, when the central bank ordered lenders to separate deposits of U.S. dollars and electronic money known as RTGS$.

Since then the cash shortage has led to the closing of factories, the more than doubling of fuel prices to the highest in the world and a surge in inflation. Protests in January left at least 17 people dead.

The southern African nation’s official inflation rate has soared to 57 percent from less than 4 percent a year ago, though several analysts say it’s even higher.

The Reserve Bank of Zimbabwe may unveil the measures in its Monetary Policy Statement to be announced on Wednesday, said the official, who asked not to be identified because he’s not authorized to speak to the media. Governor John Mangudya was said to be unavailable when his office was contacted.

The decision to adjust the value of bond notes follows submissions by the business community, company officials and individuals about how to formalize foreign-exchange trading in Zimbabwe, the official said. The government supports the move because it accepts the official one-for-one peg to the dollar isn’t working, he said.

There were $379 million-worth of bond notes in circulation in June 2018, according to an RBZ statement in October. Deposits of real greenbacks stand at about $600 million, the Harare-based Herald newspaper reported Tuesday, citing a central bank official.

Bond notes trade at 3.61 per dollar on the black market, according to marketwatch.co.zw, a website run by financial analysts. RTGS$ are valued at about 3.75 per dollar, it said. 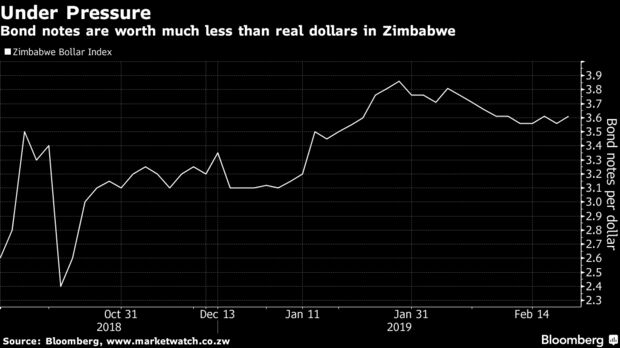 Zimbabwe introduced the bond notes in 2016 to ease a crippling shortage of cash. Their debut came seven years after the nation scrapped its own currency in the wake of hyperinflation and adopted a basket of foreign units as legal tender.


While the government currently says bond notes are equal to the U.S. dollar, they’re not accepted by foreign suppliers. That’s resulted in payment problems for companies such as gold miners and grain millers. Shops charge customers different prices depending on which unit they use to pay, offering discounts as high as 70 percent to those who use real U.S. dollars.