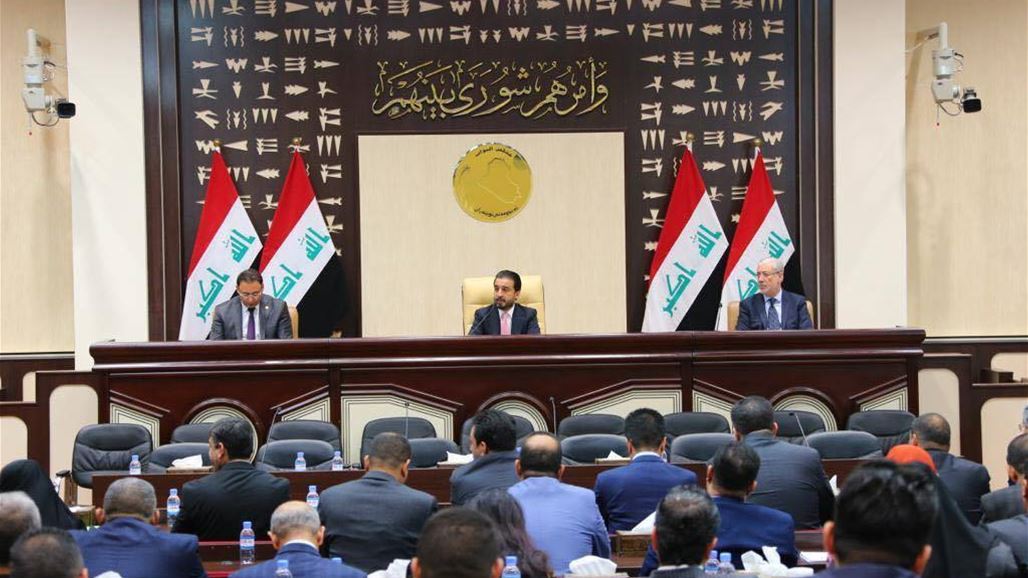 The Presidency of the Council of Representatives, on Friday, for directing a written warning to three deputies invited them to commit to attend meetings of the Council and its committees, while noting the  existence of winners of the elections did not repeat the constitutional oath so far.

"According to Article 11 of Law 13 of 2018 Law of the House of Representatives and its composition on the obligation of the Deputy to attend the meetings of the Council and its committees, and the obligation of the Presidency of the Council of Representatives to implement it was directed in writing called for the deputies to commit to attend to Sessions of the Council and its committees for those whose absences exceeded during the first legislative term the permissible limit without a legitimate excuse and they are 3 deputies. "


The office added that "there are winners of the elections for the fourth parliamentary session did not repeat the constitutional oath so far," pointing out that "this situation did not respond to the text of the law or the rules of procedure of the Council to address."

[ltr](Baghdad: Al-Furat News) The parliamentary bloc of the National Coalition, to alert the Speaker of the House of Representatives, Mohamed Halboussi, to the President of the National Coalition, Iyad Allawi, not to attend the sessions of Parliament.
The head of the bloc, Kazem al-Shammari said in a statement received by the agency {Euphrates News} a copy of it, "circulated some media and social networking book attributed to the President of the House of Representatives for Iyad Allawi without the issuance of his office or the spokesman of his name any position to deny what was written in this book Malgam , Which did not formally reach the National Coalition or its deputies or Allawi's office, in a manner reminiscent of how Saddam Hussein dealt with citizens, where he was directing his decisions and dictates through the media, "he said.
"Some of the alleged exploiters exploited the alleged book in an attempt to fool Allawi, forgetting that he and his fellow leaders had rebelled against Saddam's regime and established the political process while some were protecting Saddam's authority. Witnesses, and how he was supporting him to be governor of Anbar. "
Al-Shammari pointed out that "in a dirty and cheap speech from some of the candidates that he should cut Allawi's salary, they forgot about the crime of the bridge of imams committed by terrorism and the dozens of martyrs and wounded, Allawi donated on his own.
He explained that "Allawi does not ask for money and Aljah, who fought and will continue his struggle for the people of Iraq, and that his reluctance to attend the meetings of the parliament - unfortunately - came because of beating his boss (Halabusi) laws and the rules of the wall, and treated with duality, which is supposed to be safe on The rules of procedure of the House of Representatives and represents the Iraqi people, and when he retracts his style and respects the will of all Iraqi MPs and announce and adjust that method in the management of meetings and abide by the rules of procedure, which negatively affected the performance of the House of Representatives, then Allawi will continue with the House of Representatives.
Al-Shammari said that "Allawi has been and continues throughout the last period continue his work to serve Iraq and his great people and his government nationally, regionally and internationally, and did not spare any effort but to do for the service of the homeland and safety."
The President of the House of Representatives, Mohamed Halabousi issued a "warning" in writing to the leader of the National Coalition Iyad Allawi, demanding him to attend the parliamentary sessions and not to repeat absenteeism, and said otherwise, the parliament will have to vote on his dismissal.
Of the 329 members of the new parliament, four were not sworn in as winners in the May 12 election, including the leader of a coalition of state law, Nuri al-Maliki.
Allawi won the legal oath as deputy, but in addition to other deputies did not attend any session of parliament.
According to the rules of procedure of the parliament, the elected candidate is a member of the Council from the date of ratification of the results of the legislative elections.
Parliament has the right to dismiss a deputy if his absence goes beyond "without a legitimate excuse" five consecutive sessions in the same legislative term, in accordance with the law.
Halabousi said in his letter to Allawi, "So we alert you to exceed your absence limit prescribed by the parliaments of the House of Representatives) and we invite you not to absent in the future sessions of the House of Representatives."
The House of Representatives, issued a clarification on the absence of deputies, "noting that" the Presidency of the House of Representatives sent a written warning in which the deputies called to attend to the meetings of the Council and its committees for those who exceeded their absence during the first legislative term limit without a legitimate excuse and they are 3 deputies. "
He pointed out that "there are winners in the elections for the fourth parliamentary session did not repeat the constitutional oath so far, and this situation did not include a text in the law or the rules of procedure of the Council to address it."
[/ltr]