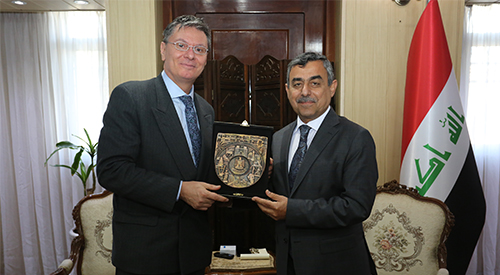 The Secretary General of the Council of Ministers received Dr. Mehdi Alalak Representative of the United Nations High Commissioner for Refugees in Iraq, Bruno Gedo, on the occasion of the end of his duties in Iraq.
During the meeting, Gedo expressed his appreciation and gratitude to the Iraqi government for the support and cooperation he had received during the period of his work. He reviewed the details of programs and projects, the developments of their implementation and the challenges ahead, among them the priorities of distributing oil in areas that are difficult to reach, insecure or remote.
He also pointed out the importance of activating and launching the financial grant for return and its inclusion in the budget of 2019 worth 1.5 million Iraqi dinars through the Ministry of Displacement and Migration.
For his part, Secretary of the Council of Ministers d. Mehdi Al-Alaq Mr. Gedo's efforts throughout his tenure as UNHCR Representative to Iraq and FAO's role in providing humanitarian response and support to IDPs in liberated areas through shelter, health care, camp management or protection.
At the end of the meeting, the Secretary-General presented a commemorative shield to Mr. Gedo, expressing Iraq's civilization and aspirations, wishing him success in his future tasks.