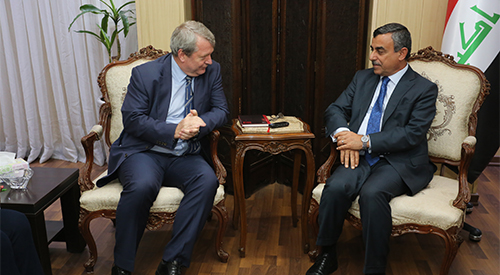 Praised the Secretary-General of the Council of Ministers d. Mahdi Al-Alak, the efforts of the United Nations Children's Fund (UNICEF) in providing technical and financial support to the Central Bureau of Statistics CSO in the conduct of the multi-indicator cluster survey in Iraq.
This came during a meeting with UNICEF representative in Iraq, Peter Hawkins, and Hamida Lasko, deputy representative of UNICEF in Iraq.
The Secretary-General has received the draft of the first report of the MICS 2018 in order to make his final comments on the report in preparation for the end of next March and in its Arabic and English versions.
The survey is one of the most important tools to monitor and measure progress in the adoption of the rights of children and women as it provides a picture of the current situation of the family, women and children in Iraq.

Most users ever online was 2065 on Mon Apr 09, 2012 5:34 pm
Latest topics
» "These riots stopped being about #GeorgeFloyd a long time ago. Enough is enough. I’m fed up watching us destroy ourselves. It’s time for me to speak."