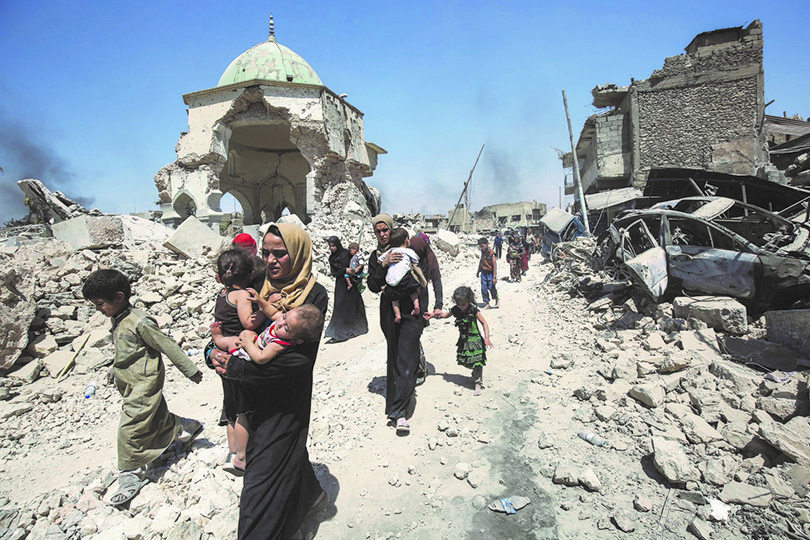 The end of military operations against terrorist groups and the entry into Iraq of the relative peace, the fluctuation of crude oil prices around the rate of (80) dollars per barrel, the increase of crude oil exports to nearly (4) million barrels per day as well as the return of security stability of most Iraqi cities, Construction and moving the wheel of development over the past year.
But the indicators of the Iraqi economy by the end of 2018 foreshadowing the risk of sliding weighted towards a new financial and economic crisis may enter all economic sectors in a deep recession if oil prices continue at current and expected levels.
Unemployment rates have risen to about 30% of the size of the working population, while the indebtedness has increased to reach 125 billion dollars (internal and external public debt). The Ministry of Planning reports that poverty and deprivation rates are high, Especially in the areas liberated from the grip of Dahesh, and faltering file reconstruction of liberated cities and support for displaced families due to lack of financial allocations and weak international support because of suspicions of corruption, which has plagued state institutions since the fall of the former regime in 2003.
Despite the emergence of several national strategies in 2018, including the Poverty Reduction Strategy (2018-2022), the National Development Plan (2018-2022), the Government Program of Mr. Adel Abdul Mahdi (2018-2022), and other national strategies loaded with economic objectives Broad and ambitious. However, the absence of all the strategies prepared for realism and objectivity, exaggerating the ambitions and economic objectives of justice, and improving the living conditions, achieving prosperity and economic diversification, encouraging the national product and unleashing the private sector and other goals.
These strategies failed in the first test when the draft of the budget of 2019 of the tools and policies needed to start the implementation of the promises and objectives included in the strategies mentioned, and the budget is a bill to cover the consumption expenditures of the state apparatus faltering, and the three presidencies, at the expense of waste of oil resources and the burden of the national economy The loss of development opportunities and the provision of minimum public services.
On the investment side, the Supreme Investment Authority and its broad institutions throughout the country's governorates have not succeeded in activating the national investment effort and attracting foreign investment, albeit at the minimum levels, in view of the bureaucracy and violent conflict between the parties of the Authority over contracts, investments and corruption. The advertiser and the actual reality of the work of investment bodies in the country, so that this institution is an investment repellent instead of attracting.
At the level of the private sector, the year 2018 was characterized by the holding of many workshops and conferences and government seminars to unlock the Iraqi private sector and provide a suitable environment for its launch and allow him to lead the locomotive of growth and economic sectors and generate appropriate opportunities for the unemployed. However, actual government policies did not provide an effective protection umbrella and adequate support for the efforts of the private sector to advance and re-emerge. Government policies were not the promised promises and recommendations.
On the other hand, the start of the Turkish government filling the Alissu dam was a major shock to the Iraqi economy, and the government's aspirations to revive the agricultural sector and provide local agricultural products in a way that meets the domestic demand and is also a provider of food industries in the country. The US sanctions file on Iran, and the need to dispense with Iranian gas, are another form of pressure that could undermine government efforts to provide infrastructure services (specifically electricity) and support the country's industrial sector.
That the emergence of new results will not be achieved without reconsidering the system of government dominating the resources and sectors of the national economy and the mechanisms of the management of state institutions and the consolidation of the rule of law and reduce dependence on oil in funding the budget and economy, and allowed the economic experts to lead economic institutions in Iraq. In order to produce economic policies by measuring existing challenges, economic policy-making functions should at least be assigned to a higher economic policy council, which includes independent economic experts and competencies. In its decisions, it is necessary to enforce and enforce, without entering into existing political conflicts, between the government and the parliament on the one hand, and the political parties inside the parliament on the other.