Creative, "presidential and ministerial" compatibility: the prelude to a prosperous Iraq

Creative, "presidential and ministerial" compatibility: the prelude to a prosperous Iraq


[size=32]Creative, "presidential and ministerial" compatibility: the prelude to a prosperous Iraq[/size]
- 6 Days Ago 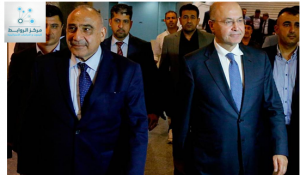 On June 7, 2016, Mustafa al-Kadhmi became head of the Iraqi national intelligence service instead of Zuhair al-Gharbawi. The former Iraqi prime minister, Haidar al-Abadi, bet on the efficiency of Mustafa al-Kadhmi, his ability to manage the intelligence apparatus, and make fundamental changes in his joints. Abadi succeeded in his bet, and Adel Abdul Mahdi, the current prime minister. Today, al-Kazimi is leading the national intelligence service in the most dangerous stage Iraq security, political, and economic deterioration .. Not only led the helm of the boat, which takes away the sea, facing the strong wind that strikes the legitimacy of each direction .. But he creates, and achieve what has not been achieved before.
The most important thing is that he did not surrender on the same path that preceded him on the site. Al-Kadhmi wanted this body to be an effective national apparatus, respected by the Iraqi citizen, not afraid, proud of him, not escaping, supporting him, supporting him and supporting him without being ashamed. Of his support, engage in his ranks, without feeling any preferential advantage, or social exception at the expense of the other citizen .. He fights corruption, does not fall in the wells of the sanctity .. Redeem his life, and sacrifice for the homeland, and is satisfied with this sacrifice, and this redemption .
The Iraqi National Intelligence Service, headed by Mustafa al-Kazemi, played a great role in eradicating the terrorist organization in Iraq. The organization was able to thwart the terrorist operations and arrest some of its terrorist elements. Especially the elements that come at the top of the organizational structure. With the qualitative information and the implementation of the International Alliance, this joint cooperation was achieved through an air strike of the international coalition in the hybrid area in eastern Syria on January 20, killing al-Baghdadi deputy (Abu Abdul Rahman al-Tamimi al-Otaibi al-Jazrawi) and killing Abu Saleh Haifa ( Ayad al-Obeidi) deputy Baghdadi, after Abu Ali al-Anbari, and then killed Abu Yahya Iraqi (Iyad Jumaili) Deputy Baghdadi, after Abu Saleh Haifa ». And the arrest of Abu Zeid al-Iraqi (Ismail Alwan al-Ithawi) Chairman of the Commission Commissioner in the organization of Dahesh.
The intelligence apparatus, headed by Mustafa Kadhmi, has become highly professional in the field of intelligence and the application of its principles in thwarting terrorist operations and the pursuit of terrorists. These principles include: knowledge as much as need, confidentiality, allegiance, sincerity and obedience, discipline and obedience, And courage.
This is what Mustafa Kadhmi has brought to the Iraqi Intelligence Service. The Iraqi National Intelligence Service (NII) has stopped in Iraq's crucial battle against terrorism and in the face of all the challenges and dangers that have beset its experience. The new democracy, and presented a constellation of his sons martyrs in the battle of honor, and continues in the struggle and carrying out his responsibilities in defense of the entity of the Iraqi state and the protection of Iraqis of all spectrums and diversity. The success achieved by the Iraqi National Intelligence Service at the level of fighting an oppressive organization headed by Mustafa al-Kazemi won the respect of all the Arab, regional and international countries. Iraq in fighting this terrorist organization is fighting on behalf of the entire international community.
The goal that Mustafa al-Kadhmi wanted to accomplish in his position as head of the Iraqi national intelligence service is to confirm that this sincere apparatus belongs to the unity of Iraq and to all Iraqis, and strengthens the citizens' confidence in it and establishes the relationship of cooperation and cooperation between the body and the citizens. And the balance between maintaining and maintaining the rule of law and maintaining the security and stability of Iraq, and is fully committed to the letter and the spirit of the laws in force, and exercise its powers within the legislative and legal frameworks, and this guarantee assured the commitment of intelligence as a human rights security and support the process of modernization and development and democracy.
As a result, we conclude that Iraq desperately needs political and security officials whose ambition is to reach Iraq in the ranks of the democratically developed, economically prosperous, stable, and politically active countries. With Barham Saleh, Adel Abdel Mahdi, Mohamed Ali Hakim and Mustafa Kadhmi, Iraq can reach that goal.