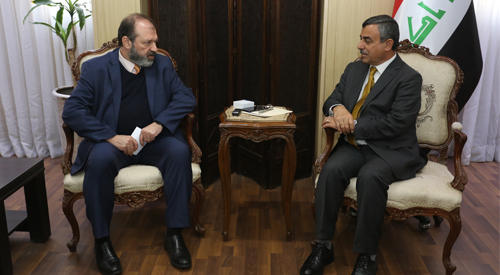 The Secretary General of the Council of Ministers received Dr. Mehdi Alalak Country Director of the United Nations Development Program (UNDP) Mr. Gerardo Noto and his delegation.
The Secretary-General emphasized that the Iraqi Government has taken a series of measures that have contributed to overcoming the challenges of restoring stability in a number of liberated areas, particularly in the Nineveh plain and the Sinjar district, by giving priority to stability and community reconciliation.
Mr. Noto reviewed the roadmap for stability and peaceful coexistence and the new strategy for the community reconciliation project in the liberated areas. He outlined the main priorities for achieving this and presented an updated draft of the reconciliation project after the approval of the Iraqi government. Among all concerned parties.
During the meeting, Noto also announced the signing by the United Nations Development Program (UNDP) of an agreement with the State of Denmark to support the United Nations program for the restoration of stability worth 2.5 million dollars over the next three years.