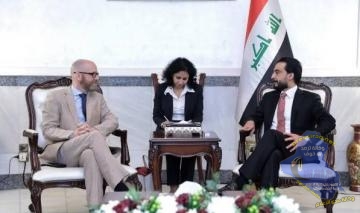 The Speaker of the House of Representatives Mohamed Halboussi called on Wednesday for international companies to activate their presence in Iraq and enhance their investment activities, stressing the keenness of parliament and the Iraqi government to cooperate with the international community.
The House of Representatives said in a statement that Halbusi "received, on Wednesday, the Minister of State Parliament in the German Ministry of Defense Peter Michael Tauber and his delegation," explaining that "during the meeting discussed bilateral relations and ways to develop them, and promote cooperation between Baghdad and Germany, Parliamentary friendship. "Al-Halbusi stressed" the keenness of the Council of Representatives and the Government of Iraq to cooperate with the international community - including Germany - in areas of common interest, first and foremost the fight against terrorism and reconstruction and benefit from German expertise in these areas, Military and humanitarian. "
Al-Halbusi added that "Iraq fought a war on behalf of the world through which the blood and sacrifices were made to liberate humanity from this extremist organization." He called on international companies, including Germany, to "activate their presence in Iraq and enhance their investment activity and reconstruction of liberated cities as well as underserved areas , Which contributes to the restoration of stability in Iraq. "For his part, the Minister of State parliamentary in the German Defense Ministry, his country's keenness to" support Iraq in the important files related to security and reconstruction, "in advance" an invitation to the Speaker of the House of Representatives to visit Germany. "