If you want to know when the Zimbabwe bond notes first went gold backed, just look at the serial numbers of the highest and lowest denominations. 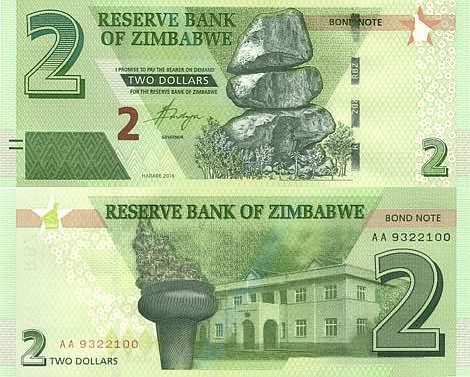 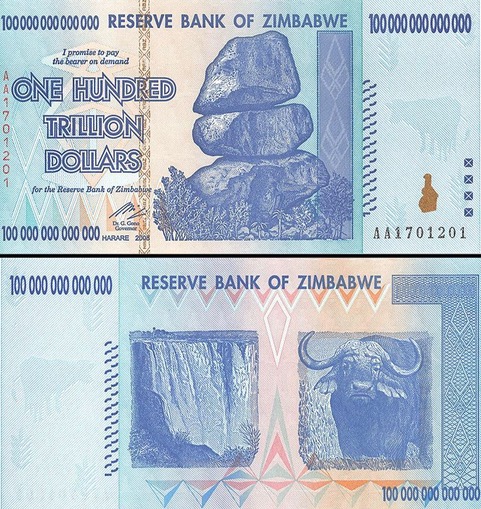 They are both from the same exact series issue with a sequential numerology given their release dates nearly a decade apart.

How can this be if the Zimbabwe currency was decommissioned in 2009 and 25 zeros reported loped?

Well, it can’t, that’s how. Because the Zimbabwe bonds were the first currency issued on the new digital quantum financial system back in December 2008.

Know that whether you hold the old and new bond notes, they are exactly the same series right down the three rocks on the front, but only one is accepted internationally as the national currency of Zimbabwe and at the legal 1:1 international valuation on par with the USD.

Remember, ALL Zim bond notes were written into the Zimbabwe Constitution (November 2016) as their active national currency—which includes the older series issue back in 2008.

Every bond note is still 1:1 and active. Already. Right now.

Zimbabwe (and China) attempted to hide the international release of the new Zimbabwe currency in the printing of bond notes and coins exactly a decade prior, as to hide their true value.

It’s your God-given-right to know exactly what is happening geopolitically, financially, diplomatically and militarily.

This is why China and the RBZ printed such absurd face value numbers, as all bond notes large and small were and are asset backed, and why all bond notes share the same serial numerology and identifying three rock formation to this day.

The reverse printing was done to aid in the deception, acting as a natural cover story of Zimbabwe being an impoverished nation due to immoral government; when in actuality the bond notes have been the world’s most valuable currency since 2008 (on the new financial system soon to be announced) when they were first printed in Germany on bond paper and released in-country.

Now this also was done by the BRICS Alliance in retaliation for the cabal’s 9/11 attacks in 2001; and why the western nations of NATO shut down Zim bond note printing only a month after they were initially released—forcing their complete removal in less than six months.

Be aware that the war has not yet ended and Trump is forcing US reparations less the “establishments” approval.

Also know there is already enough mined, above ground reserves of both gold and diamonds to issue a new Zimbabwe currency that covers the higher than high face value of the old bond notes—which ironically is exactly what a also sovereign bond entitling the holder to a line of credit against said tangible hard assets.

Meaning Zimbabwe has the necessary reserves for every currency in the world. Hence, why Zimbabwe printed bond notes and not bank notes, which are fiat currencies backed by little to no hard assets.

Zimbabwe and China have hid the RV roll out right in front of all western faces for ten plus years, and are just now revealing to the public what they had long planned and invisibly executed less the vast majority of the world ever knowing.

No that you were chosen by God to serve people in need, people in distress and people of color.

Start taking that spiritual assignment seriously if you haven’t already. As that will be everyone’s professional Top Down Philanthropy (TDP) future if they redeem even one bond note of Zim.

And I mean everyone.

Folks, the true mineral wealth of Zimbabwe is beyond your understanding—unlimited—and why they had to hide their wealth for so long—this way. As no one in their right mind would believe it so.

Yet it is what it is.

It’s also why the Chinese financed the movie Black Panther and released it at this time last year, Chinese New Year February 16, 2017.

All to gently reveal Africa’s emergence into the global lexicon of great continents and properly place the long hidden benevolent truth of African tribes into mass consciousness.

Making your Zimbabwe bond notes all valid and incredibly valuable at any face value you own.

Redemptions will start at 1:1 with the USD but can escalate higher upon request.

So please bear this in mind when redeeming your Zim, as it is the last time I will be speaking to this matter.

To review, all Zim bond notes, large and small, already have hard mineral assets backing every printed number as represented by each bond notes face value—GOING BACK A DECADE!!!!!!!

The real truth is that Zimbabwe has dozens or rare earth mineral assets just waiting to be exploited for humanity’s benefit, but are still largely unexplored.

And I mean far, far, far more valuable. Africa people is the future of humanity—and Zimbabwe (Bantu Tribe) their Black Panther leader ready to leapfrog over the western world.

So not only is there enough “money in the world” to deliver your individual blessing as has long been represented here to all Human Angels, but an equivalent amount of physical rocks to support the printing of all currencies worldwide.

Know that Zimbabwe alone (thanks to said African Tribal Elders controlled by the Bantu nation) has agreed to collateralize the world’s new digital quantum satellite and computing financial system being run and monitored out of Beijing. In exchange, China gains critical access to their abundant mineral reserves for manufacturing advantages.

Together with Russia’s military strength, the BRICS are releasing the world from economic bondage and giving humanity a non-recourse opportunity (leverage) against Africa’s tangible hard assets—processed by HSBC bank globally.

You may ask for anything you want in terms of the rate and secondary investment interest as you’ll be negotiating a private contract with HSBC.

But honestly, the numbers are irrelevant given what this is all about to transpire—as we are engaging in our own way the liberation of humanity from usury enslavement.

And if you still fear the redemption process after reading this—that’s because you prefer being a slave than a sovereign being.

By the way, this is also why there 46 countries and thousands of international overseers watched the Zimbabwe presidential elections last July. As every national currency (economy) was dependent upon Zimbabwe for having a peaceful and non-violent election.

Another 9/11 cabal style am(BUSH) of the global financial system will not be tolerated, and the release of said new hard asset system is releasing at this hour.

Any dangerous scenario and actors will by shutdown without asking questions by the international community regardless of circumstance.

Yes, humanity will finally be freed this time after 18 painful years of waiting; and you happened to score a lucky sovereign wealth lottery ticket that soon will allow you to bless your home, family, community and country ad infinitum.

Just know the more money you do take, the heavier your life will become. As to much is given, as much is expected by God... and in exact proportion.

So if you want to be a servant of Christ, and spend the remainder of your days finding innovative and aggressive ways to disburse economic mercy to others in need, ask for as much as you can manage comfortable.

If not, take what you need for your family (extended) and leave happy, less the weight of the world on your shoulders.

Infinite wealth is not a comfortable lifestyle for everyone.

As everyone’s final take home amount will lie somewhere between the Pure Grace or God and the horrors of a deceased anti-Christ fiat financial system that began over 400 years ago.

My deepest prayer is that all reading this with Zim will follow these suggestions, and fully surrender to God’s Will as to find the proper life /wealth balance so that they don’t exterminate themselves out of greed or ignorance.

Truly it’s a life or death decision, whether you are aware of the long-term ramifications or not.

This website HAS explained the consequences, good and bad, in great depth and repeatedly to be point of nausea.

So at this late juncture, please consider yourself a graduate of the sovereign wealth school of hard knocks and know you were loved enough to be both well educated and sternly warned of your upcoming choice.