US troop withdrawal from Iraq before end of Trump mandate

US troop withdrawal from Iraq before end of Trump mandate 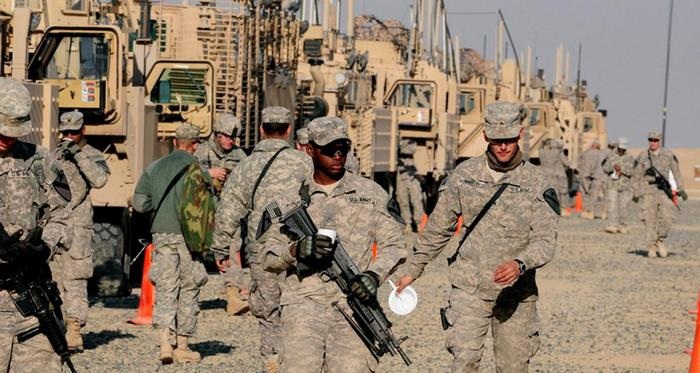 The US presidential plane landed in the darkness of the Iraqi military base of Ayn al-Assad in western Anbar with Donald Trump on board, but as his plane took off after three hours, Trump left a parliamentary political storm in Mesopotamia, Iraqi parliament leaves 5200 US troops out of the country.
None of the three Iraqi leaders (Prime Minister Adel Abdul Mahdi, House Speaker Mohamed Halboussi and President Barham Salih) Trump because the three presidencies refused to hold a meeting with Trump under his terms.
On Friday morning, the Syrian army entered the outskirts of the city of Manbaj after an agreement between the Kurdish leaders and the Damascus government. The question is: Will he end up leaving Iraq before the end of his term in January 2021?
It seems that the US president is ready to fulfill his promise to withdraw from Syria, at least in an embarrassing situation. The United States has declared an "organized exit", meaning withdrawal with Turkey in order for Ankara's forces to replace the withdrawing US troops.
Turkey was preparing to enter Mnbj and Tal white by gathering thousands of troops and agents who are on the border of the Syrian province. However, the agreement reached on Thursday night between the Syrian government and members of the Kurdish People's Protection Units gave the green light to the fifth group of the Syrian army to restore Manbaj, raising the Syrian flag over the city and this development hinders the way for Turkey and its agents to move to the province. Russia.
Moscow stands in the way of any change of power on the ground, and Turkey refuses to take control of more Syrian territory not already included in the "Astana deal", which approved the provisional judicial authority of Turkey in the Idlib region.
Russia believes there should be a natural handover of Kurdish-controlled areas to the Syrian army after the US withdrawal. Damascus and Tehran insist in this case: Only the Syrian forces should replace the US forces in the province of Hasaka.
Moreover, the Damascus forces are still stationed in Qamishli and can easily control all positions when the United States withdraws the occupying forces from northeastern Syria. There are already observation posts (villages) under the control of the Syrian army, some with Russian observers, in different villages around Manbaj. This is a clear message to Ankara that the troops can not cross without Russia's approval, otherwise they will be bombed and attacked. The control of Manbeg is a game of change and a clear signal that the Damascus government will control the province of Hasaka to focus later on Idlib, after the US withdrawal, with the help of Moscow.
Russia called for an important meeting between the presidential envoys, foreign and defense ministers and heads of intelligence services in Russia and Turkey on Saturday in Moscow to talk about the US withdrawal and the role of each side. Another meeting (not a final one) is scheduled between Turka, Russia and Iran in Moscow within a few weeks. The goal is to prevent any split between these leaders that could result from the US withdrawal from occupied Syria. Damascus rejected the presence of the local Kurdish administration on its part and agreed to disarm the Kurds, a Turkish and Syrian demand, after a humiliating defeat. In fact, the Kurds will help the Syrian army fight a fugitive along the Euphrates River where a battle is expected to soon begin to end the control of an organization calling on the region. As a supporter no longer enjoys the protection of the United States, the end of its occupation of part of Syrian territory is imminent.
During negotiations with Russia, Turkey argued that the United States might not allow Syrian forces to move. Turkey has claimed that any changes in the agreement reached between Trump and Erdogan could change the US decision to withdraw. Damascus and Tehran are keen to see US troops go from Syria, but not to hand over the region to Turkey. Russia supported Damascus in this position.
Ankara was already afraid that its unilateral decision to move to the Kurdish-controlled area could lead to Russian intervention against its proxies (the Euphrates Shield, the Army of Islam, the Hamzah Brigade, Ahrar al-Sharqiya and others), and perhaps lead the Iranians to arm Kurds and Arab tribes in the province to prevent any annexation Syrian territory. The Turkish forces and their agents, who are currently occupying Graplas, Bab, Afrin and Idlib, are unwilling to enter into a war against the Syrian army, with the support of Russia and Iran.
Turkey seems ready to absorb Russia and Iran - the Turkish army and its Syrian agents will never be able to cross 500 kilometers from Manbaj to Deir al-Zour, where it is the richest oil and gas region. This area is dozens of kilometers from the nearest Syrian army site on the other side of the Euphrates River.

Russia asked Damascus and Tehran to develop a strategy and coordination with the Russian army to develop a plan of action and a road map after the US withdrawal, with the highest priority to eliminate the evils and avoid any clash with Turkey if possible. The situation was very sensitive and complex among these allies. With the return of Manbaj, the situation seems to favor Syrian unity, signaling the end of its division or any possible buffer zone.
Tehran believes that the United States will not leave the Levant and Mesopotamia without leaving the unrest behind. This gives its officials an additional impetus to pressure the Iraqi parliament for a US withdrawal from Iraq.
There is no doubt that Iraq is a close ally of Iran and not a supporter of the United States and the Iraqi parliament can put pressure on the government of Prime Minister Adel Abdul Mahdi to ask President Trump to withdraw US troops before the end of his mandate in 2020.
The American Foundation and the "axis of resistance" planning, but the word The latter will belong to the people of Iraq and to those who reject American hegemony in the Middle East, those who can accept casualties and wounds in Iraq.
Source: zerohedge