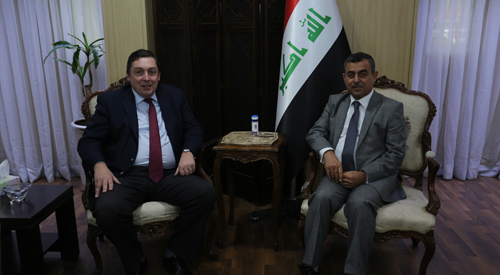 The Secretary General of the Council of Ministers received Dr. Mehdi Al-Alaq, British Ambassador to Iraq, Mr. John Wilkes, and the Development Counselor at the British Embassy, ​​to discuss means of joint cooperation between Iraq and the United Kingdom in the field of electricity sector, renewable energy investments and major power generation projects in Dhi Qar and Samawa governorates.
The meeting also discussed a road map for the fundamental and comprehensive economic and financial reform in Iraq and ways to achieve strategic development through supporting the private sector investment and providing technical support and flexibility of facilities with the help of brothers and friends and the international community to achieve the achievements possible and overcome obstacles to occupy Iraq. And security.
The two sides discussed the selection of an Iraqi leadership for the new fund of the World Bank with technocrats, and ways to develop a plan for reform and peaceful coexistence for the next five years.
At the end of the meeting, Wilkes congratulated HE Al-Amin on the launch of the Iraqi National Action Plan for Security Council Resolution 1325 on Women, Peace and Security for the years 2014-2018. He commended the efforts exerted by the Government of Iraq, Kurdistan Regional Government and representatives of civil society on this great achievement. Role in the new government formation.
For his part, the Secretary-General praised the role of the United Kingdom in supporting Iraq, pointing out the need for continued support in order to benefit from the experiences of friendly and brotherly countries to restore and rebuild the liberated cities.
In a related context, the Secretary-General received French Chargé d'affaires in Iraq, Jean-Noel Bonio and Consul Jean-Pierre Pérez, to discuss a number of common issues and to provide logistical support to the French Embassy for the continuation of their work in Iraq.
Noel referred to the French president's upcoming visit to Iraq at the end of February next year, and the visit of the French foreign minister in January to consolidate the bilateral relations between Iraq and France, and France's support for Iraq in various sectors.
For his part, welcomed the Secretary of the visit of French President Emmanuel Macaron and Mr. Foreign Minister expressed his support for the French diplomatic mission in Iraq on various levels. 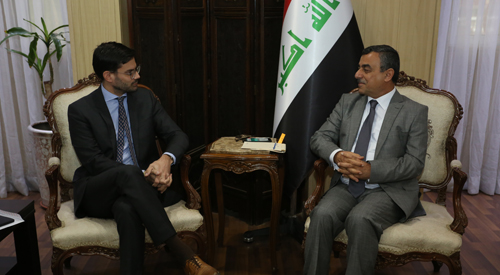