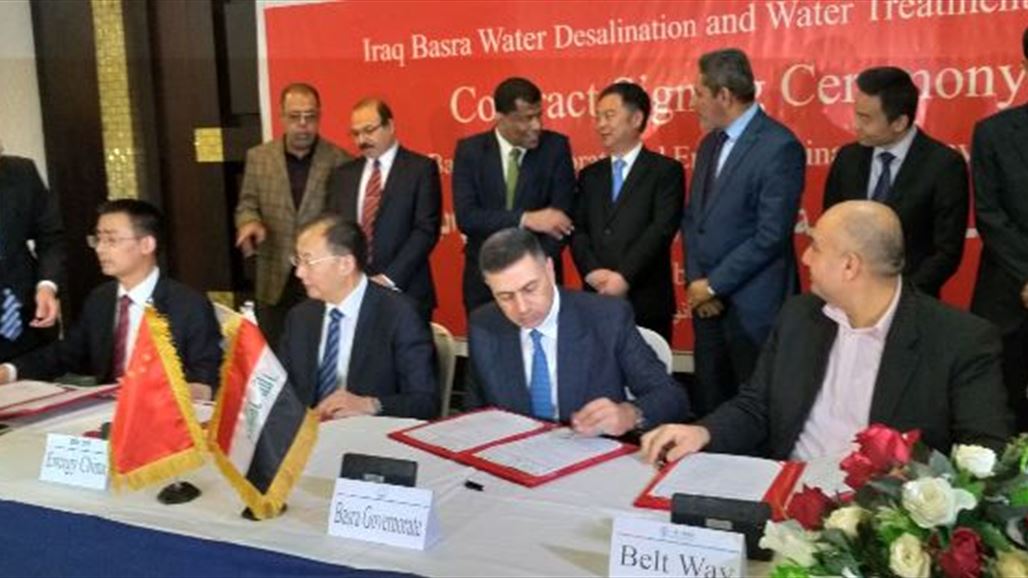 Alsumaria News / Baghdad
The governor of Basra , Sunday, the signing of a memorandum of understanding with a Chinese company to implement two desalination and desalination plants in the province.

Basra, southern Iraq, has been in crisis for decades for water for human use, prompting angry protests over the past months to demand services and water supplies.

On Sunday, the local government of Basra signed a contract with two Chinese companies to set up two desalination and purification plants.
The governor of Basra, As'ad al-Eidani, told reporters after the signing ceremony held today at the Basra International Hotel in the presence of several officials of the local government and the Chinese ambassador that one of the projects is special to clear water at the station and the second project to set up a desalination plant for the Shatt al-Arab.
The head of the China Engineering Power Company Dongbin said that they are ready to set up the projects and that before the period of Zeman had studies of those projects, indicating that their company has the experience and the cadres sufficient to qualify them to implement and set up such projects.
For his part, director of water Basra Zuhair Jawad, the capacity of the desalination plant in the Shatt al-Arab district is 3,000 cubic meters per hour and the implementation period for a full year and the project's total amount of one hundred and five billion, either the project of liquidation at the station of Arziru and five thousand cubic meters and the implementation period The contract is thirty billion dinars.
For his part, Qaimmakam district of the Shatt al-Arab Haidar Tameh that the project is one of the most important projects for the people of the judiciary because of high concentrations of salts in the waters of the Shatt al-Arab, which feeds and depends on the population of the judiciary.

The governor of Basra, Asaad al-Eidani after meeting with the Japanese ambassador in Iraq on the agreement to accelerate the completion of the water project under the Japanese loan, noting that the coming summer will see the pumping of water for the citizens.

Al-Eidani told Al-Marabed that the work on the water pumping project will be through three meals after the speed of work by the implementers. He pointed out that he will hold a conference calling on the Japanese companies to Basra to implement projects for 2019.

For his part, Japanese Ambassador to Iraq Hashi Moto said that his visit to Basra is the first after taking office, indicating that they aspire to provide various projects in the sectors of energy, electricity, agriculture and water.