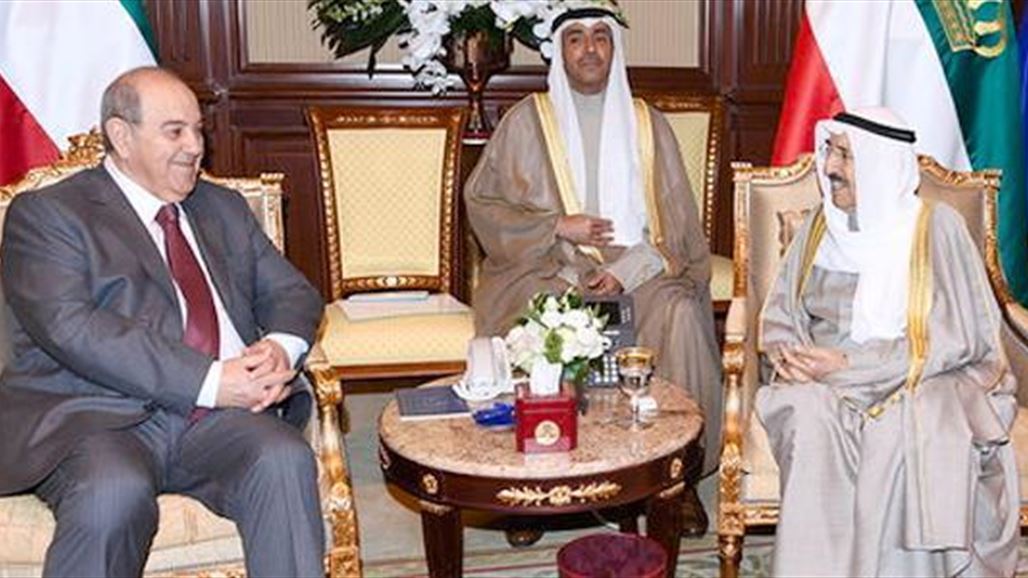 Allawi praised "Kuwait's support for Iraq during its war against gangs and called for terrorism, particularly in the humanitarian and humanitarian fields."

Allawi said he "wished the prince to form a high committee to follow up the results of the conference, in addition to the wise positions of the Amir on Arab and regional issues and issues."

Allawi also pointed out that "the meeting touched on a number of issues and issues concerning the bilateral relations between the two brotherly countries and the importance and necessity of promoting them to develop them." He stressed that "Iraq is an important stabilizing factor in the region and Arab and regional efforts should be aimed at enhancing its security and unity. Effective return to the Arab and international systems. "

For his part, Amir of Kuwait, according to Allawi's statement, stressed "the depth of historical and brotherly relations between the two brotherly countries."

Kuwait hosted an international conference on Iraq's reconstruction on February 12, 2018, about two months after the Iraqi government announced the end of the fighting and the defeat of the official "Da'ash" organization.

Donor pledges on the third and final day of the conference reached about $ 30 billion.

Similar topics
» Kuwait to form committee to draft trade agreements with Iraq
» Iraq urges the formation of a committee to follow up the outcomes of the Kuwait Donor Conference
» With a view to fairness of the holders of diploma certificate in Iraq .. Minister of Planning to form a committee of the Ministry to follow up their case with the relevant authorities in the legislative and executive
» Iraq’s Minister of Finance visits Kuwait for talks on economic cooperation, investment
» Abadi calls Amir to allay Kuwait’s concerns; FM to brief Assembly