Prime Minister Adel Abdul-Mahdi on Sunday discussed with his Japanese counterpart Kintaro Sunwara the idea of ​​setting up a joint reconstruction fund between the two countries.

"Abdul-Mahdi received Sunwara and his accompanying delegation in his office today, and expressed pride of Iraq at the level of relations with Japan and thanked the Japanese government for the support provided by the Japanese government in the areas of security, stability and reconstruction projects," a statement from Abdul Mahdi's office said. Economic and cultural cooperation ".

"Iraq will be an excellent partner for Iraq and has completed many urban and service projects in Iraq and we have a lot of interests and ambitious future projects," he said, adding that "Iraq has begun to regain stability and health and play its pivotal role and the countries of the world turn to us to feel stability and strengthen Security and democratic life ".

"The initiative of the partnership and economic cooperation between the Iraqi and Japanese governments includes the call for the establishment of a joint fund to finance reconstruction projects through the quantities of Iraqi oil exported to Japan and funded by the Japanese side of the fund to encourage the Japanese companies known to operate in Iraq, and the Iraqi government will provide a package of projects in a manner guaranteeing The success of the work of Japanese companies and accelerate their efforts and smooth work. "

"This initiative will further strengthen the relationship between the two countries, accelerate reconstruction efforts, create economic projects, create job opportunities for Iraqis, diversify national wealth and reduce dependence on oil, and provide corresponding opportunities to attend Japan in the Iraqi market and the region in general," he said.

He pointed out that "it was agreed that the Iraqi side to make a statement of the main lines of the project through the Japanese Embassy in Baghdad to be studied by the Japanese authorities to contribute to the consolidation of cooperation between the parties."

"He was present when the prime minister made his visit to Japan as oil minister and he finds this vision interesting," he said.


He stressed the "Japanese government's desire to expand relations with Iraq in all areas and move more effectively in support of Iraq's stability and reconstruction and completion of service projects, and support the efforts of the Iraqi government to develop the Iraqi economy and consolidate efforts to security and stability and strengthen the democratic experience." 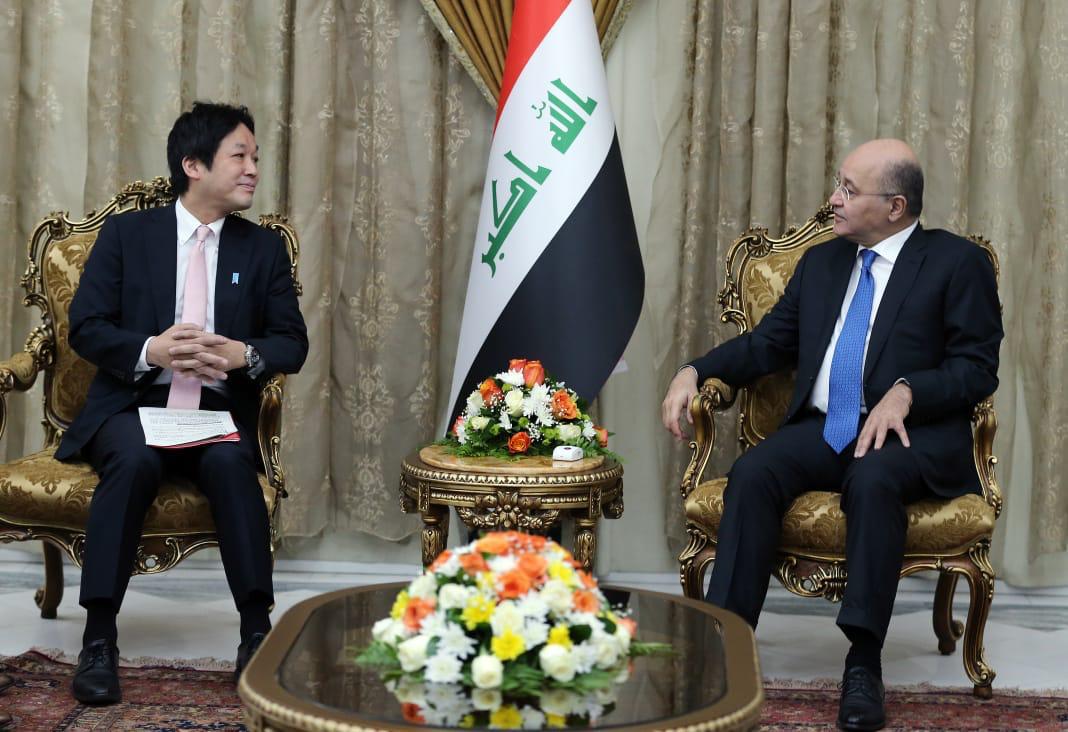 confirmed the Special Adviser to the Japanese Prime Minister, Kentaro Sonoora, Sunday, his country 's readiness to Msahh in the reconstruction of the liberated areas affected by terrorism, as expressed Tokyo 's desire to expand the horizons of serious cooperation.
"The President of the Republic, Barham Salih, received at the Peace Palace in Baghdad, Kintaro Sunwara, Special Adviser to the Prime Minister of Japan," said a presidential statement received by Mawazine News.
Saleh stressed that "Iraq is keen to fully open with the countries of the world based on respect for sovereignty and the exchange of common interests," praising the "positive role played by the Japanese government in support of the political process, and its contribution to the process of construction and reconstruction, and help the displaced."
He stressed "the importance of building partnership relations with Japan, especially in the areas of investment, reconstruction of infrastructure and the provision of basic services and the promotion of urban and industrial reality," praising the "constructive relations between the two countries, which extends for nearly 80 years, and witnessed the qualitative mutations had an impact In the development and development of prospects for joint cooperation. "
In his turn, the Special Adviser to the Japanese Prime Minister reiterated his country's keenness to support Iraq in its fight against terrorism and its earnest desire to expand the horizons of cooperation, especially in the fields of development, rehabilitation and training of Iraqi cadres and developing their expertise in all fields.
"Japan is ready to contribute to the reconstruction of areas affected by terrorism," he said