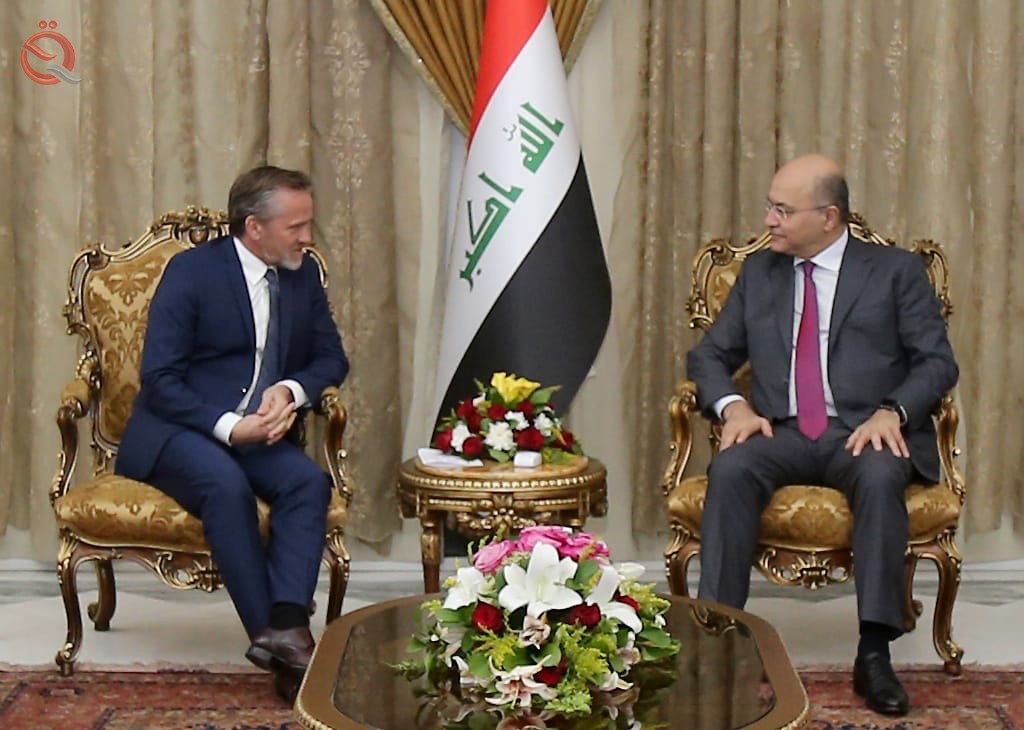 Iraq on Thursday called on Danish companies to contribute to the reconstruction of its cities and investment.
The President of the Republic, in a statement received by "Economy News" a copy, "The President of the Republic Barham Salih, received at the Peace Palace in Baghdad today, Foreign Minister of the Kingdom of Denmark Anders Samuelson."
During the meeting, Saleh stressed the importance of developing common relations between the two friendly countries, activating serious cooperation and expanding the volume of trade exchange to serve the common interests of the two friendly peoples.
"The European Union and the Danish government support Iraq in its fight against terrorism," he said.
The President of the Republic, "Iraq aspires to further cooperation in the field of investment," calling on Danish companies to "contribute seriously in the process of reconstruction and reconstruction and participation in investment opportunities available within the country through the construction of housing units and rehabilitation of factories and contribute to the development and development of the Iraqi economy" .
In turn, the Danish Foreign Minister stressed the keenness of his government to "continue to support Iraq in all fields, and its desire to consolidate and expand the common relations between the two friendly countries." 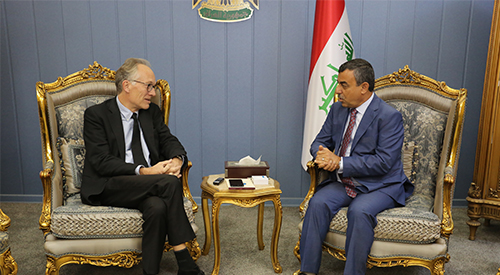 The Secretary General of the Council of Ministers d. Mehdi Al-Aalak during his meeting with the Ambassador of Denmark in Iraq, Mr. Geert Maincke, the Iraqi government to support the requirements of reforming the national economy in all sectors (agricultural, oil, industrial) and the development and modernization of the reality of Iraqi public companies and include industries (fertilizers, electricity, Training and developing national skills through adopting the PPP concept and encouraging investment.
During the meeting, the two sides discussed means of improving the economic ties between the two countries and the joint cooperation by overcoming the obstacles facing the projects submitted by the Danish side in order to support projects to restore stability in the liberated areas.
During the meeting, Al-Alak welcomed the invitation of Maynke to attend and participate in a conference for the reconstruction of Iraq in Copenhagen in January next to the Kuwait Conference and in the presence of the Danish industrial companies in all their formations and the relevant Iraqi parties.
Maenke also pointed out that "Denmark aspires to activate the bilateral agreements between the two countries and cooperation in various fields," pointing out the visit of the Danish Foreign Minister during this week to the capital Baghdad to activate mechanisms of joint work in various sectors.

Agency of the orbit -
Baghdad
Secretary-General of the Council of Ministers Mahdi Al-Alak, on Thursday, the Iraqi government's approach to support the requirements of reform of the national economy in all sectors.
Al-Alaq confirmed during a meeting with the Danish ambassador to Iraq, Geert Maincke, that the Iraqi government will support the requirements of reforming the national economy in all its sectors (agricultural, oil, industrial) and developing and modernizing the reality of Iraqi public companies. (Fertilizers, electricity, textile, and automobile production) in all provinces, and training national staff and skills development, by adopting the concept of the company between the public and private sectors PPP and encourage investment '.
"The two sides discussed during the meeting ways to improve economic ties between the two countries and cooperation through overcoming the obstacles facing projects submitted by the Danish side in order to support projects to restore stability in the liberated areas," the statement said.
He continued that 'the relations welcomed the invitation of Mayinke to attend and participate in a conference for the reconstruction of Iraq in Copenhagen in January, similar to the Kuwait Conference and the presence of Danish industrial companies in all formations and relevant Iraqi parties.
For his part, Maenke pointed out that 'Denmark aspires to activate bilateral agreements between the two countries and cooperation in various fields'. He pointed out that 'the visit of the Danish Foreign Minister during this week to the capital Baghdad to activate mechanisms of joint work in various sectors.' End 3 a

Baghdad, 14 December 2018 – The United Nations Mine Action Service (UNMAS) in Iraq welcomes an additional contribution of DKK 19.5 million (approximately USD 3 million) from the Government of Denmark to mitigate the threat posed by explosive hazards and enable stabilization efforts in liberated areas of Iraq. The support was announced today by visiting Danish Minister for Foreign Affairs Mr. Anders Samuelsen.

“We are painfully aware that the return of internally displaced persons to some kind of normal life is not possible as long as explosive hazards threaten their life and safety. That is why UNMAS’ work remains so critical”, the Danish Minister for Foreign Affairs said. [He appreciated the close cooperation between the Directorate of Mine Action (DMA) under the Ministry of Health and Environment and UNMAS].
The presence of explosive hazards, including improvised explosive devices (IEDs) in areas liberated from the Islamic State in Iraq and the Levant (ISIL), will continue to impede security and stability efforts if not appropriately addressed. UNMAS Iraq is working closely with the United Nations system and the Government of Iraq to enable humanitarian and stabilization efforts.
This additional contribution from the Government of Denmark brings the total Danish support for UNMAS’ work in Iraq to USD 14 million. UNMAS’ explosive hazard management activities create conditions for sustainable return of displaced people. In addition, it contributes to improving coordination, engagement and capacity enhancement of relevant authorities, threat impact assessments as well as clearance and risk education initiatives. This reduces the risk of explosive hazards in direct support of humanitarian and stabilization planning and delivery, while at the same time increase national capacities to manage the overall threat of newly identified explosive hazards.
“1.8 million persons are still displaced and explosive hazards is one of the main reasons and concerns cited by internally displaced persons for not going home” said Mr. Pehr Lodhammar, UNMAS Iraq Senior Programme Manager. “Denmark is a crucial partner for supporting explosive hazard management activities and enabling the safe, orderly and dignified return of displaced communities.”
Contact
Pehr Lodhammar, UNMAS Iraq Program, Senior Program Manager lodhammar@un.org
Jan Pirouz Poulsen, Snr. Stabilisation Advisor, Danish Ministry of Foreign Affairs janpou@um.dk