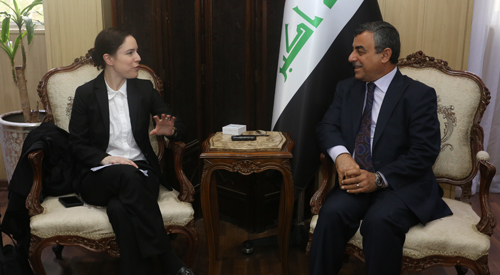 The Secretary General of the Council of Ministers d. Mahdi Al-Aalak on the government to take important decisions in the implementation of transitional justice in Iraq, the most important half of the segments that were damaged during the rule of the former regime before the year 2003, and dealt with high transparency with members of the former regime of non-cadres leadership, Requirements for the voluntary return of displaced persons, including families belonging to terrorist organizations.
During his meeting with the research team at the Center for Political Research at the United Nations University, the Secretary-General, during their visit to Baghdad, headed by Dr. Mara Rivikin and Mr. Hani Megali, briefed the delegation on the results of the study prepared by the Group entitled " To achieve a balance between accountability and reconciliation in Iraq / case study, stressing that the study will receive the attention of the government to review the comments contained in the submission to the Council of Ministers.
The study is a comprehensive analytical approach to the Iraqi justice sector towards individuals accused of association with Da'ash, as well as an analysis of the legislative framework to combat terrorism in Iraq, the challenges posed by Iraq in dealing with suspicious suspects and the challenges of reconciliation and long-term stability in areas liberated from intimidation, To identify areas requiring more detailed policy guidance on the use of transitional justice tools.
The Center for Political Research at the United Nations University is a think tank of the United Nations, based in New York. The Center has recently completed a long-term research project on how to implement transitional justice tools in conflict situations involving terrorist groups.