Well, it's apparent that "Tim White" is a liar who doesn't have an honorable bone in his body, or when proven wrong, he would retract and apologize for his false bombast.

And it is also apparent that "Virgo Triad" aka "Kim Goguen" is of the same ilk.

Unfortunately, as I pointed out, they have an infinite number of aliases to hide behind, so it is up to each one of you to discern the truth---- and who is telling you the truth, too.

In this present time, it's easy to see that I separated from Bruce Doucette and the others prior to them being arrested for cause and that they did not follow my advice --- which led to this deplorable situation.

It's also easy to see what I said about April LeJeune and her TDA packages from other posts that have appeared on my website.

So the proof that I am telling the truth and that they are lying is pretty obvious, cut and dried --- this time around. But what if it wasn't so easy for me to point out the truth, with a verifiable public record to back it up?

Would you be swayed by what these known liars say? Probably not.

What if these same known liars were to dream up some other names for themselves ---- like "Jeremy Black" instead of "Tim White" or "Jupiter Duo" instead of "Virgo Triad"?

You wouldn't recognize the Bad Source and might take them seriously, right?

So you have to school yourselves --- first of all, by knowing by past experience that I am a reliable source to the extent that a human can be, and second of all, by learning to recognize trolls and deceivers.

These people never really identify themselves, who they are, where they come from. There's always some excuse -- it's for their safety, it's to protect their family, it's because they have a big pimple on their snout and they are embarrassed to be be seen. It's always something.

They never show their faces, never take the risks that telling the truth requires. And, as a result, they never take responsibility for what they are saying, either. They just "snark and run" like nasty little kids on the playground.

But at least here on this FB page you know exactly who I am and where I come from and who is responsible for what she says, good and bad. So in future, when assailed with a bunch of crappola coming from such "sources" --- ask yourself seriously--- why you would even listen to them?

They are unknown and irresponsible by definition.

Anna von Teitz wrote:And it is also apparent that "Virgo Triad" aka "Kim Goguen" is of the same ilk.

Judge Anna has been drinking too much again!


Virgo Triad is the complete opposite of Kim Possible.

What the heck is going on with these people? 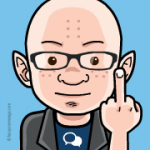 As for the other three mentioned here, I have barely heard of them, so I can't offer an opinion. Until I do more research, I will have to rely on Anna Von Reitz opinion.