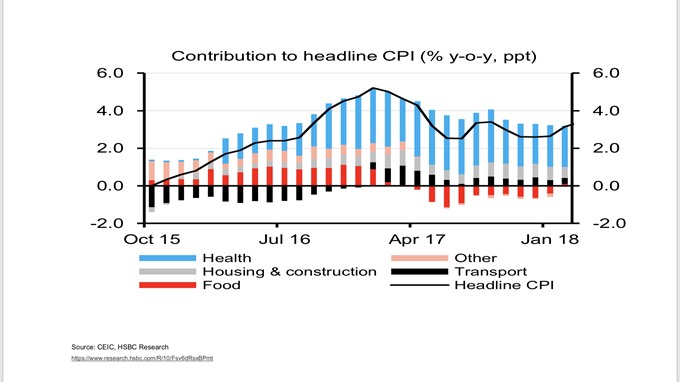 Viet Nam News HÀ NỘI — The exchange rate between the đồng and the US dollar will be stable and end at VNĐ22,900 per US dollar by the end of 2018, predicts Ngô ĐăngKhoa, head of Global Markets, HSBC Bank Việt Nam.

The prediction is based on high capital inflows and the đồng’s weakness against other currencies in the region, Khoa said.

At the same time, the rise of the Fed’s (US Federal Reserve) base rate of the dollar has had a dampening effect on financial markets. Few foreign investors are investing in government bonds. For the Vietnamese stock market, although the liquidity has increased in recent years, the size of the market is still small compared to the region, so foreign investment in the stock market is often long term. In addition to this, given Việt Nam’s macro-economic outlook, foreign investors are more likely to look at the long term than short term.

Thus, although the Fed increased interest rates three to four times per year, HSBC is still patient believing that the VNĐ/USD exchange rate is generally stable. What is noticeable in Việt Nam this year is the inflation target of 4 per cent due to pressure from high food and oil prices. By the end of February, the inflation rate in Việt Nam was 3.15 per cent.

The price of petrol is difficult to control as it is decided by global oil prices. In 2017, food prices were low, leading to negative growth compared to 2016. Therefore, this year, inflation is likely to jump when food prices rise even slightly. If food and petrol prices continue to rise, inflation in Việt Nam may exceed the four per cent target in June-July, Khoa said.

Inflation comes from adjusting prices of services, in which more than 50 per cent come from health and education services. HSBC predicts that by the end of the year, Việt Nam’s inflation will return to 3.7 per cent. — VNS