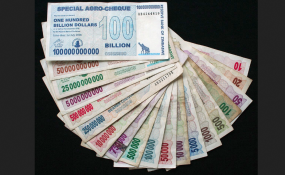 By Conrad Mupesa
Government will not introduce a local currency before establishing the right and necessary import cover, Finance and Economic Development Deputy Minister Terrence Mukupe has said.

Addressing a public lecture organised by the Zimbabwe Congress of Students Union at Chinhoyi University of Technology during the weekend, Deputy Minister Mukupe said although the bond notes had outlived their fundamental purpose it was primarily premature to re-introduce the Zimbabwe dollar.

The bond notes were introduced in 2016 as a way of bringing liquidity and economic stability in the economy.

Deputy Minister Mukupe said Zimbabwe would have its own currency before President Mnangagwa completes his first five-year term.

"For now, we cannot be talking of having our own currency or even joining any monetary unions," he said. "Zimbabwe will have its own currency after putting the necessary fundamentals to deal with our own currency first, which will be there before the end of President Mnangagwa first five-year term as we would have managed to create the right and sustainable import cover.

"That is also the time we will be able to join any monetary societies like the Rand Union if we so please. Uninformed economic analysts suggest that Zimbabwe should join the Rand Union, but it's only possible to be part of that society if you have your own currency, which we don't have."

Deputy Minister Mukupe said for Zimbabwean products to be competitive on the regional and international market, there was need to work on adjusting the costs such as electricity, which are essential for the growth of the industrial sector.

Zimbabwe has the most expensive electricity in Southern Africa, but Government, through various projects, hopes to reduce the costs through investing in energy. President Mnangagwa recently commissioned the Kariba South Power Station Expansion project that has added 300 megawatts to the national grid, while reducing Zimbabwe's electricity import bill.

President Mnangagwa also signed the agreement, which was now awaiting ratification by Parliament.