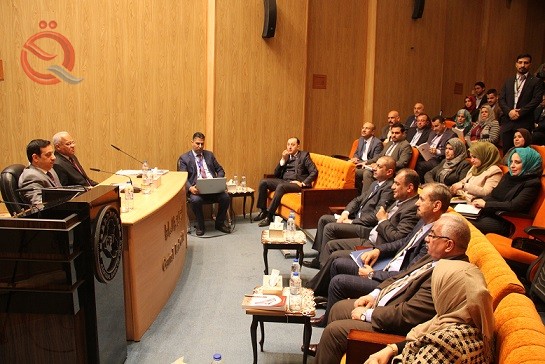 The economic and banking adviser to the Association of Iraqi Private Banks, Samir al-Nusairi, issued his book entitled (Central Bank in the face of the challenges of economic and financial crisis), which documents the Bank's efforts in supporting the national economy.

Al-Nusairi said in a seminar to present the book, held in the Central Bank of Iraq and attended by the "Economy News", that "it is held under the guidance of the Governor of the Central Bank Ali Al-Allaq to review the book," noting that "it documents transparently and impartially the Central Bank's procedures 2017-2015 Has been able to take effective steps to support the national economy and promote economic steadfastness. "
He pointed out that "includes ten chapters with 300 pages of medium-sized pieces containing an overview of the objectives and positions of the Central Bank of Iraq as stated in Law 56 of 2004, and the challenges facing monetary policy and financial and economic analysis of the structural imbalance in the economy in addition to the central crying procedures in the face of these challenges and overcome The economic and financial shocks that faced Iraq. "
"One of the chapters discusses the central bank's strategy for 2016 2020, its five basic goals and its subsidiary, which has 18 goals," he said. "It includes an assessment and classification of the banking sector in accordance with international standards, particularly the classification for the purpose of selling the currency."
He pointed out that the book deals with the analytical vision of the objectives of the policy of Iraq and its instruments and the achievements of the years 2004 and 2017, as well as contain an important chapter on the challenges facing the banking sector and how to address them by the Central Bank of Iraq, The administrative and regulatory procedures carried out by the specialized departments of the Bank, which contributed effectively to achieve the direction of the Central Bank to support the national economy.
He concluded by saying that his latest version contains a document containing the documents issued by the Central Bank for combating money laundering and terrorist financing and its strategy for the years 2016 2020, in addition to the guidelines for the follow-up and detection of money laundering, as well as a statistical annex to the tables and financial statements, Period.

The symposium was attended by the participants of the symposium, the first of which was the Director General of the Administrative Department of the Central Bank of Iraq, Saleh Mahoud, where he praised the book promising scientific achievement important especially for researchers and science seekers.

In turn, praised the President of the Association of Private Banks, Wadih al-Hanal, the role of the Central Bank of Iraq regarding the establishment of confidence between the banking sector and the Central Bank.