I appreciate your site.  I've read it since when Okie was lying up a storm.

Does anyone here have information about when Tony had previously spent 4 years in prison?  I'd like to know what that was for.

He was indicted on a number of felonies in 1998 and was sentenced in 2002 to four years in CA state prison.  Seems like it was tax fraud. 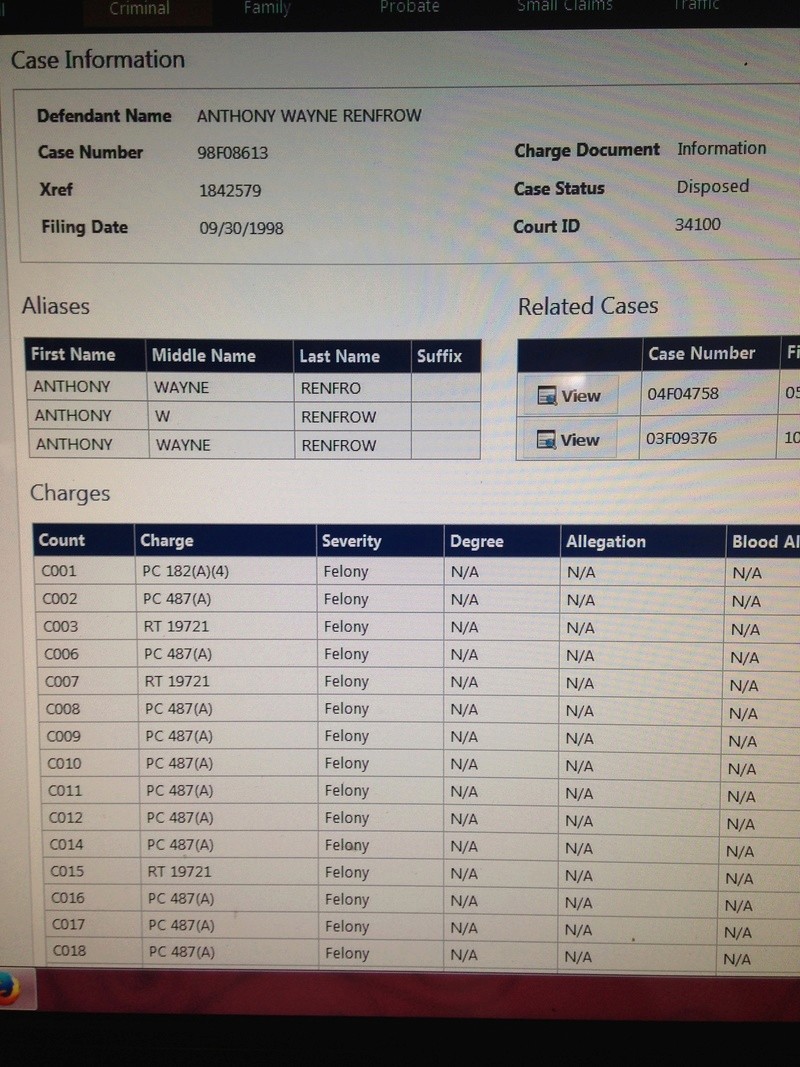 Grand theft is theft committed in any of the following cases:

(a) When the money, labor, or real or personal property taken is of a value exceeding nine hundred fifty dollars ($950), except as provided in subdivision (b).

(b) Notwithstanding subdivision (a), grand theft is committed in any of the following cases:

(1) (A) When domestic fowls, avocados, olives, citrus or deciduous fruits, other fruits, vegetables, nuts, artichokes, or other farm crops are taken of a value exceeding two hundred fifty dollars ($250).

(2) When fish, shellfish, mollusks, crustaceans, kelp, algae, or other aquacultural products are taken from a commercial or research operation which is producing that product, of a value exceeding two hundred fifty dollars ($250).

(3) Where the money, labor, or real or personal property is taken by a servant, agent, or employee from his or her principal or employer and aggregates nine hundred fifty dollars ($950) or more in any 12 consecutive month period.

(c) When the property is taken from the person of another.

(d) When the property taken is any of the following:

(a) If two or more persons conspire:

(2) Falsely and maliciously to indict another for any crime, or to procure another to be charged or arrested for any crime.

(3) Falsely to move or maintain any suit, action, or proceeding.

(4) To cheat and defraud any person of any property, by any means which are in themselves criminal, or to obtain money or property by false pretenses or by false promises with fraudulent intent not to perform those promises.

(5) To commit any act injurious to the public health, to public morals, or to pervert or obstruct justice, or the due administration of the laws.

They are punishable as follows:

When they conspire to commit any crime against the person of any official specified in paragraph (6), they are guilty of a felony and are punishable by imprisonment pursuant to subdivision (h) of Section 1170 for five, seven, or nine years.

If the felony is conspiracy to commit two or more felonies which have different punishments and the commission of those felonies constitute but one offense of conspiracy, the penalty shall be that prescribed for the felony which has the greater maximum term.

When they conspire to do an act described in paragraph (4), they shall be punishable by imprisonment in a county jail for not more than one year, or by imprisonment pursuant to subdivision (h) of Section 1170, or by a fine not exceeding ten thousand dollars ($10,000), or by both that imprisonment and fine.

When they conspire to do any of the other acts described in this section, they shall be punishable by imprisonment in a county jail for not more than one year, or pursuant to subdivision (h) of Section 1170, or by a fine not exceeding ten thousand dollars ($10,000), or by both that imprisonment and fine. When they receive a felony conviction for conspiring to commit identity theft, as defined in Section 530.5, the court may impose a fine of up to twenty-five thousand dollars ($25,000).

All cases of conspiracy may be prosecuted and tried in the superior court of any county in which any overt act tending to effect the conspiracy shall be done.

Thank you, very much, SSmith.  I think you are right that it was tax fraud.

Page 1 of 1
Permissions in this forum:
You cannot reply to topics in this forum
Who is online?
In total there are 111 users online :: 0 Registered, 0 Hidden and 111 Guests :: 2 Bots

Most users ever online was 2065 on Mon Apr 09, 2012 5:34 pm
Latest topics
» Head of a bloc: the complexity of dealings with oil companies in Kurdistan has caused disruption to pass the budget

» The exchange of the dollar into two prices, starting from 120 up to 145 thousand: a "new plan" that is applicable to the end of the crisis in Iraq

» Barry Evans says that Iraq is misdirecting the Gurus (More Reason Not To Listen To Them!) 2/22/21

» Iraq is on the edges of economic recovery in two areas?

» MarkZ says -- everybody is staying in position. this thing is imminent

» Footforward says -- Most likely the banks will exchange a small amount into cash, maybe 10K

» MilitiaMan says -- Looks like Iraq has been given the GREEN LIGHT!! ...