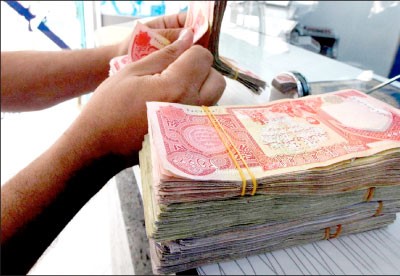 The Finance Committee announced a significant decline in the deficit of the budget of 2018 General, where it constituted 27 trillion dinars of the total size of 108 trillion dinars, to become today 13 trillion dinars, because of the recommendations of the International Monetary Fund, which put Iraq in the right way in the management of state funds And the pressure of government expenditures, she said, with the increase in oil prices than expected, while an economist believes that the reasons for the decline is the growing sources of financial revenues in the budget, in addition to the optimization of non-oil resources.

It is worth mentioning that the financial stability in Iraq and the elimination of the budget deficit is not limited to reducing spending wasted, but also depends on increasing non-oil revenues even as oil prices are modest, and as long as the security situation continues to improve, Iraq has a good chance to attract Traders and investors who are most needed to meet reconstruction needs over the next two years.

According to a member of the parliamentary finance committee, Ahmed Kanani said in an interview for (the extent) that the current deficit in the budget is estimated at "13 trillion after it was 27 trillion dinars, as there are no new deductions in the salaries of employees and retirees this year and keep them as they were before, Noting that the low proportion of the deficit in the budget of 2018, came because of the conditions of the International Monetary Fund, which put Iraq in the right way to manage state funds, not to mention the pressure of government expenditure, which is clear to all institutions and ministries to reduce the proportion of excess surpluses need, including reducing dividends, He added: On the other hand, The austerity measures taken by Prime Minister Haider al-Abadi led to convincing results.

Kanani believes that if the budget was better checked by the Council of Ministers, as is currently the case in the House of Representatives, we may have now a surplus of up to 8 trillion dinars, saying by saying: The budget was built on the basis of the price of selling oil 46 But today the price of the barrel exceeded $ 63, so the budget had to be built on the basis of the sale price of $ 50 a barrel at a minimum, and here the difference has reached the limit of $ 4 per barrel, which will provide the budget of about 7 trillion.

Kanani stressed: the need to have a real collection, whether in ports or border ports and electricity and other facilities that can provide the state treasury with huge funds, therefore, if we do this procedure, we will have a surplus in the budget for this year, on the other hand, the presence of Changes and transfers in some government institutions that do not need to spend large amounts and cancel or reduce, certainly will not suffer from any financial deficit for this year.

The reasons for the decline in the deficit of the budget of 2018, is the difference between the estimated financial revenues and operational and investment expenses, in addition to maximizing non-oil resources, and the change in oil prices, as experts believe, at the time emphasizes expert on economic affairs, (Range) that the budget that the parliamentary Finance Committee, along with the so-called corrective budget, which shows the amount of deviation that occurs in the budget, especially in relation to the proportion of the deficit.

The deficit for this year in the general budget is much lower than in the previous year. The reasons for this decrease are the difference between the revenues and operating and investment expenses and the growing sources of revenues in the budget. The budget for 2018 is different from last year's budget, "The difference between the price of oil approved by the budget on the basis of $ 43 per barrel, and the price of a barrel of oil at the moment, which reached $ 63 a barrel, This difference in prices has provided sucking New financial assets managed to reduce the deficit).

The current deductions from salaries of employees and retirees have no legal basis and should therefore be eliminated in the 2018 budget, because these deductions were exclusively for military expenditures and public mobilization salaries, which means that the justifications on which these deductions were based Has disappeared completely and must also be canceled, but it seems to remain for other reasons as we heard from the World Bank, in accordance with the new additional conditions placed on Iraq.