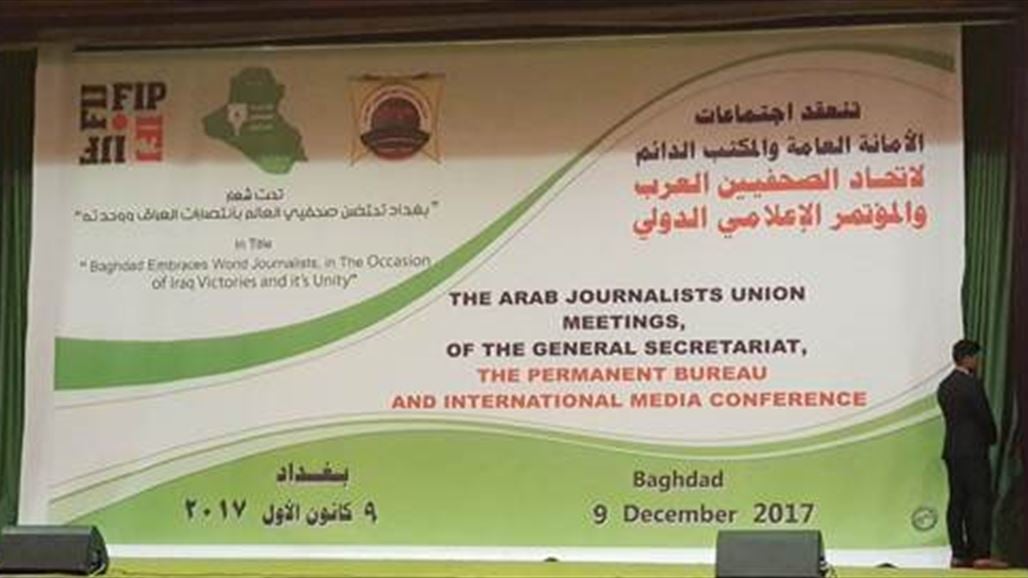 Alsumaria News / Baghdad The
activities of the International Media Conference began on Saturday under the slogan "Baghdad embraces journalists of the world with Iraq's victories and unity" for the period from 9 to 11 December 2017, with the participation of the League of Arab States and Arab and international media leaders.

"We have received the participating delegations that have arrived in Baghdad from dozens of countries," said the head of the Iraqi Journalists Syndicate in an interview with Alsumaria News. "This conference gives the impression that Iraq has achieved something important for the world by winning over and maintaining its unity."

"The world is now looking at Iraq as the country's strong victor," he said, noting that "this session will bear the name of the Jerusalem session."

Baghdad International Airport witnessed a round-the-clock round-the-clock round-up of Arab and foreign delegations attending the International Media Conference organized by the Iraqi Journalists Syndicate on Friday, which lasted four days. Head of the Board of Directors of the Association of Omani Journalists Awad Ben Said, as well as Mounir Zaarour, Director of Arab Programs and Politics at the International Federation of Journalists, and the Egyptian Minister of Information Former Makram Mohamed Ahmed, Mahmoud Khalifa, Undersecretary of the Palestinian Ministry of Information.

The Egyptian delegation also included the Secretary General of the Union of Arab Journalists, the Under-Secretary of the Egyptian Syndicate of Egyptian Journalists Khaled Miri, the members of the union Ayman Abdel Majeed and Ibrahim Abou Agila, a number of Egyptian media leaders and 30 journalists and journalists representing the Egyptian media. Secretary of the Syndicate of Lebanese Editors, Ramz El Tanbour, Dean of the Faculty of Information, Lebanese University of Jinan, Ali Yousef and Wasef Awwad, members of the Lebanese Association.

The Bahraini delegation, which included Mawns Tamerdi, president of the Bahrain Journalists Association, Zahra al-Mokhtiri, head of the Bahrain Freedoms Committee, Ayhdia Ahmed, head of the Committee on International Relations and Women, Khalid Bouli, Nour Diaa and Salah Salah, members of the association, Salah Omar Al-Sheikh, secretary-general of the Union of Sudanese Journalists, and Walid Moustafain, foreign relations in the Union.