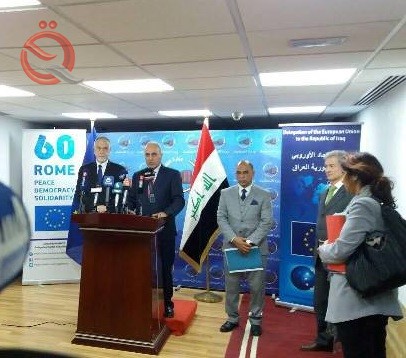 "Iraq today signed with the European Union two grant agreements to finance the implementation of two projects aimed at restoring stability and the return of civilians in the liberated areas and a total amount of 60.4 million euros," Planning Minister Salman Jumaili told a news conference on the sidelines of the signing of the agreement.

Al-Jumaili pointed out that "the two projects are aimed at addressing the humanitarian challenges and the challenges of security, stability and reconciliation and contribute to their financing in partnership with the European Union a number of donor countries namely Denmark, Finland, Italy, Japan, Estonia and the United Kingdom."

"The first project of € 50.4 million is intended to help restore essential services and rehabilitate public infrastructure as well as restore economic life, restore basic services and earn a living by offering grants to small enterprises," he added.

He added that "the second project, which is granted 10 million euros will be dedicated to continue to facilitate the process of cleaning the land that was contaminated by the bombings and will be through mine control in the United Nations in coordination with the Iraqi government," stressing that "this will help create conditions that allow return Safe and voluntary for more than 3 million displaced people. "

Jumaili stressed that "the Iraqi government will provide all necessary support to facilitate the implementation of these projects," expressing "continued cooperation and coordination in all areas of technical and humanitarian."