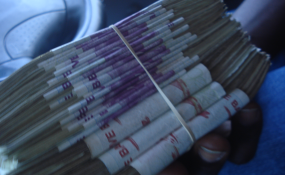 Government abandoned the Zimbabwe dollar in 2009 after the currency had been rendered worthless by hyperinflation. The crisis peaked in 2007 when the country experienced the second-highest recorded inflation rate in history.

Biti, who served as a Finance minister during the Government of National Unity, said Zimbabweans should brace for another hyperinflationary environment as Mugabe puts the money printers into high gear.

"Our biggest fear is that Zanu PF's appetite for expenditure is insatiable," said Biti during his second State of the Economy Address (SEA) on Wednesday.

"Expenditure and expenditure obligations will thus continue to increase whilst the fiscal space continues to shrink.

"However, this government has exhausted the capacity of domestic resource mobilisation as no one is prepared to accept Treasury Bills anymore. In this situation, we view the return of the Zimbabwe Dollar as inevitable."

The PDP leader said the current monetary situation in Zimbabwe was based on the myth of transferable balances known as RTGS.

"This is a serious danger to the banking system. The banking system is holding mirror balances; should they ever be called to account for them, they will fail to do so," said Biti.

"Thus, from a very short period time, from Aug 2016 to August 2017, there's been a massive growth in broad money supply (M3) the bulk of which has been the RTGS balances.

Steve Hanke, an economics professor at Johns Hopkins University in the United States, also warned this week that hyperinflation was returning to Zimbabwe.

According to a Reuters report, Hanke said Zimbabwe's real inflation rate was 313 percent a year and 112 percent on a monthly basis.

He dismissed official statistics that put year-on-year inflation at just 0.78 percent in September as a "truly fantastical piece of artwork".

"Zimbabwe, welcome back to the record books! You have once again entered the inglorious world of hyperinflation. It is a world of economic chaos, wrenching poverty and death," he said.

"Its purveyors should be incarcerated, and the keys should be thrown away."

Meanwhile, Biti also said the issue of capture and corruption was a concern particularly the involvement of the First Family being at the centre of countless questionable deals including the creation of Zimbabwe Airlines a, firm that is meant to benefit the first family.

"The first family is also at the centre of the formation of a new airline called Zimbabwe Airways in respect of which several individuals are being paid millions of dollars to approve the purchase of second-hand Boeing planes from Malaysia airlines despite these being at the centre of crashes that happened in recent times," he said.

Similar topics
» Gono plots return of Zimbabwe dollar
» The Zimbabwe dollar is listed at 1 for 1 against the U.S. dollar on the U.S. Treasury Bureau of Fiscal Service Website
» Zimbabwe: Too Early for Z$ Return - Mukupe
» No return of local currency yet, Zimbabwe central bank says
» Zimbabwe’s Black Market Is Warning That Hyper-Inflation May Return

Page 1 of 1
Permissions in this forum:
You can reply to topics in this forum
Who is online?
In total there are 87 users online :: 0 Registered, 0 Hidden and 87 Guests :: 3 Bots