And how long before we get the usual idiocy of "false flag" "crisis actors" etc etc. 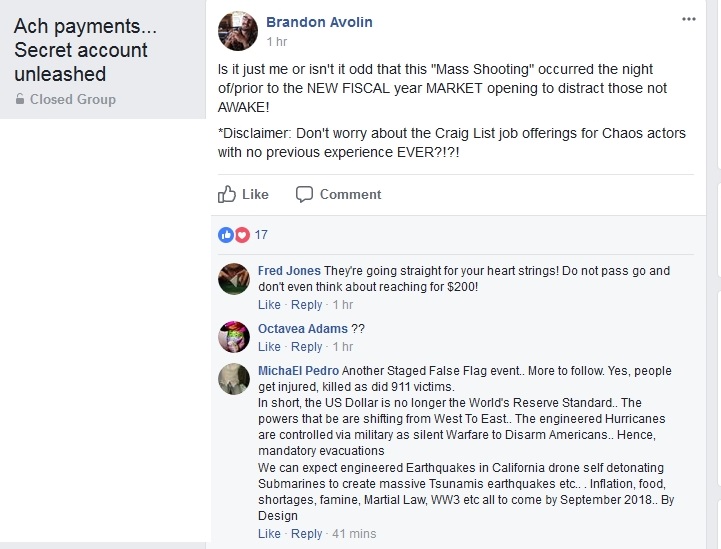 Deep State is getting very desperate

Here’s how we know: “Deadliest Mass Shooting In US History”: At Least 50 Killed, Over 400 Injured After Shooter Opens Fire At Las Vegas Concert 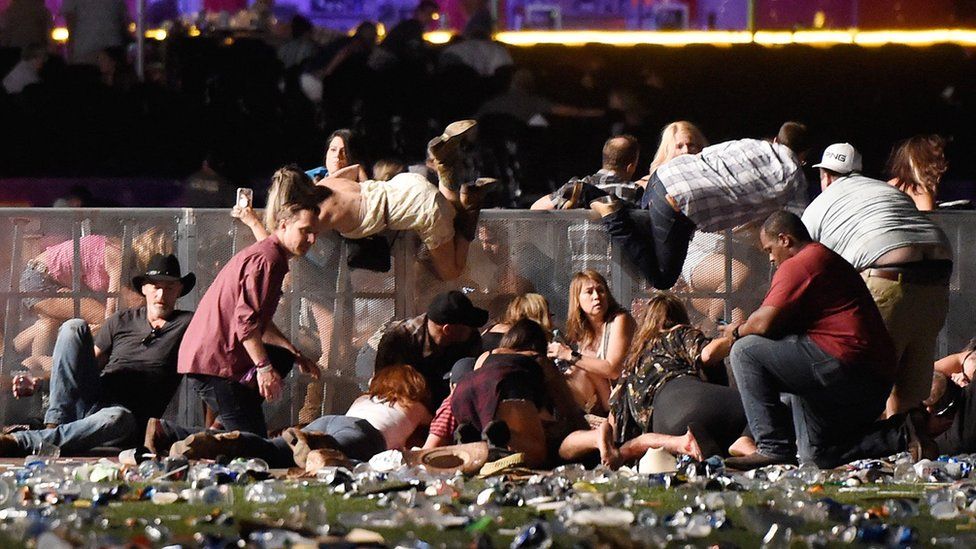 Though there were initial reports of multiple shooters and multiple incidents up and down the Strip, Clark County Sheriff Joe Lombardo said at a press conference held at 1:30 a.m. local time that it was believed that there was only one suspect.
That man was killed on the 32nd floor of Mandalay Bay after officers responded to the shooting. Lombardo said that investigators are looking for the suspect’s roommate, an Asian woman named Marilou Danley.

Lombardo declined to identify the suspect, who he called a “lone wolf.”
Asked about the shooter’s motive, Lombardo said, “We don’t know what his belief system was at this time.”
(Source: Massacre At Mandalay: Las Vegas Gunman Kills At Least 20 At Country Music Concert [VIDEO])

The crime scene hasn’t even been thoroughly investigated and the local county sheriff has already called this false flag mass shooting a lone-wolf operation!  That, right there, is a dead giveaway.
There is also an increasing trend over the past couple of years whereby these BIG false flag operations are executed at night.  The cover of darkness gives the real perps so much more opportunity to cover their tracks and manipulate the crime scene to fit their predetermined narrative.

Why did they do it?

Things have not been going well for the globalists.  Their New World Order agenda is in complete disarray.
First, the NFL Kneelgate scandal has really back fired…so much so that the NWO ruling cabal has to change the national conversation.  Nothing does that quicker than a mass casualty event (MCE).  The NFL crashes and burns! Collapse of the celebrity culture now inevitable.
With the NFL in a free-fall collapse, the globalists were forced to divert the attention of the American people.  The institutional responses to the NFL fiasco were particularly impactful with NASCAR completely rejecting the practice of kneeling during the anthem.  The NBA likewise sent out a memo banning the same form of protest both individually and collectively.  NBA memo warns teams to stand during national anthem ‘OR ELSE’
This sudden reversal of fortune for the globalists was both embarrassing and unexpected which demanded an expeditious response … … … like a horrifying MCE in their view.

There’s no question that the U.S. territory of Puerto Rico has been transformed into an unparalleled disaster area.  The extent of the human catastrophe alone is still unknown because of the inability to get to many parts of the devastated island.  Many are unaware that Puerto Rico has experienced 2 major superstorm hits: first from Hurricane Irma; then from Hurricane Maria– the first category 4 to hit the island since 1932.
The key point is that Puerto Rico has been evolving in the direction of a major political football.  The Democrats, especially, are attempting to seize any political advantage they can in an effort to tarnish President Trump with his first “Katrina”.  SOTN is writing an investigative report on the reality in Puerto Rico and the extent of the political subterfuge being used by the locals.  The Democratic San Juan mayor seems to be a major player in these machinations, although a verdict on her official conduct cannot yet be rendered conclusively.
Is the San Juan Mayor blocking hurricane relief or are logistics in Puerto Rico really impossible? 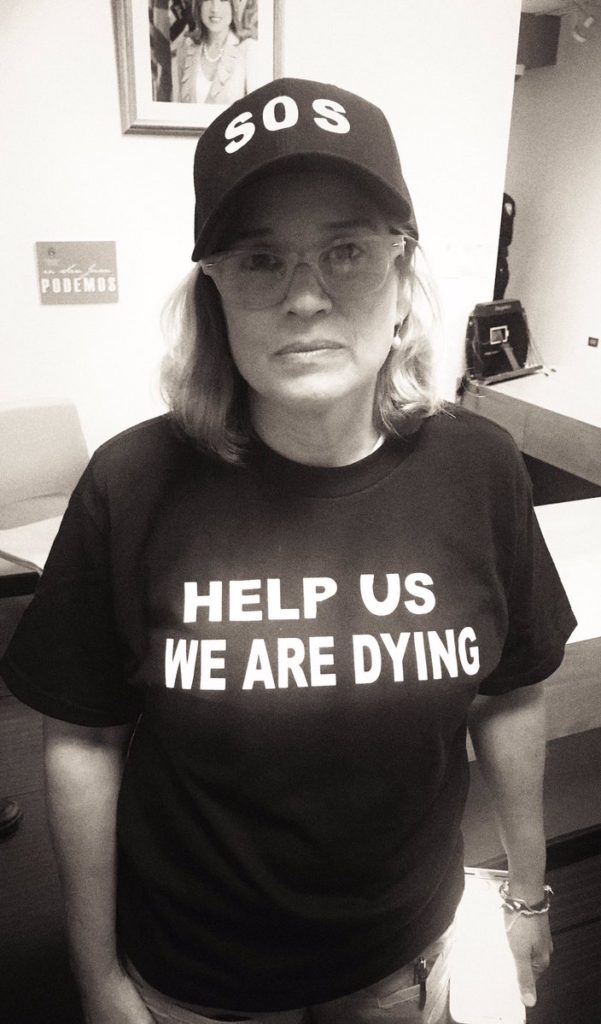 San Juan Mayor Carmen Yulín Cruz,
The bottom line here is that the globalists are clearly using the island Democrats to sabotage Trump’s relief effort.  However, the Alt Media is catching some of the more obvious acts of subversion in real time.  This is making the cabal’s plan to ruin Trump’s reputation as a compassionate nationalist quite difficult to execute.
With each passing day, successive Trump’s tweetstorms expose this perfidious globalist scheme.  Thus, the NWO cabal is compelled to rapidly change the conversation.  This is where MCE events like Las Vegas get the job done faster than anything.

How do the FEDs get away with so many in-your-face attacks on the American people?
These exceedingly violent MCEs have actually been made ‘legal’ by the most recent version of the NDAA (National Defense Authorization Act), that was aggressively pushed under Obama.
Yes, this legislation may sound totally insane, and it is; but it is also enshrined by legislation passed by Congress and signed by Obama.  As follows:

“FALSE FLAGS” are LEGAL PROPAGANDA PRODUCED by the Department of Defense
The unending spate of mass shootings and bombings is a direct result of this fundamentally unconstitutional and unlawful federal statute.  And hardly anyone knows about it!

Why did they choose a country music concert in Vegas for their massacre?

There are actually many reasons why they carried out this bloodbath at this particular specific venue.
As always, the globalists want to take guns from every American citizen.  An armed America is the single greatest obstacle toward the establishment of their planned One World Government.
Even more concerning for the power elite is the absolute necessity of disarming the populace BEFORE the controlled demolition of the Global Economic and Financial System.  They are well aware, given the raw truth routinely disseminated on the Internet, that the wealthy elites will be in the crosshairs of every patriot, nationalist and militiaman.  Not only is the truth out there about the wholesale theft of America’s future by the NWO cabal, anyone who cares to find out exactly who is accountable for the multi-decade crime spree can simply surf the net.
Of course, taking down a LOT of innocent country music fans who tend to be conservative and Christian, patriots and nationalists, Trumpsters and Tea Partiers, was an attempt to sway them toward gun control.  The delusion of the globalist was that if the NRA members and hunters were so appalled by this incomparable slaughter perpetrated by multiple snipers in Vegas, they just might demand some form of substantial gun control legislation for their own protection.
Then there is the intention to punish the ever-politically incorrect patriot movement.  Bringing such deadly mayhem to a country music venue sends the unequivocal message that the perps can duplicate the unspeakable carnage anywhere, anytime they want to in similar music settings around the country.
There is much more to this strategy which derives directly from NATO’s Operation Gladio. This ongoing “strategy of tension” has been systematically implemented in Europe over decades for the purpose of terrorizing targeted civilian populations in order to produce a specific outcome.  NATO’s Secret Armies. Operation GLADIO and the Strategy of Tension

As this Las Vegas PsyOp continues to unravel in the days ahead, other objectives will make themselves clear.
The very fact that so many were apparently killed and wounded makes this a classic black operation conducted by the C.I.A. in close cooperation with the F.B.I. and local law enforcement.
Whenever an MCE is analyzed so quickly as a lone-wolf mass murder, who could not possibly have shot so many people so swiftly, the U.S. Intelligence Community is obviously behind the whole charade.
Does Deep State really expect US to believe that the “National Security State” is incapable of detecting such transparent acts of domestic terrorism?
State of the Nation
October 2, 2017
___
http://stateofthenation2012.com/?p=85146

"The crime scene hasn’t even been thoroughly investigated and the local county sheriff has already called this false flag mass shooting a lone-wolf operation!"

Or...
"The crime scene hasn’t even been thoroughly investigated and the wing nuts have already called this lone-wolf operation a false flag mass shooting!"
*****************

Sorry Ethel - way too many inconsistencies, this is way way more than poor real-time reporting of a crime scene.  Agree to disagree.