...[Guru] Kaperoni may be right in they will float the IQD...BUT it will not float with the notes carrying 3 zeros... NEVER EVER NEVER!  What we are looking for is money moving on market openings 10/8 after 5 pm and transfers etc...  Not to get into all the specifics...We just hope 3 zero notes are in play and the government needs us a mules to house accounts with cash at banks...

Iraq will never have a free floating currency until their economy is diversified with less than 50% oil revenues. It has nothing to do with zeros. It has to do with basic laws of economics and currency valuation. You don't free float a currency when 90% of your GDP comes from the sale of oil because the price of oil is too volatile. That's why Saudi Arabia, Kuwait, Qatar, UAE, Oman, Bahrain etc. ... all have tightly managed floats which amount to defacto pegged currencies.
*****************
Busting Gurus Since 2011

I wonder if Jens Nordvig considers himself a GURU in the same class as all the self anointed currency experts that the re-craps have helped to support & elevate to cult status ..

No mention of the GCR (baskets) and/or any impending RV's ..

Tinef2 wrote:I wonder if Jens Nordvig considers himself a GURU in the same class as all the self anointed currency experts that the re-craps have helped to support & elevate to cult status ..

No mention of the GCR (baskets) and/or any impending RV's ..

well currency always RV everyday Why because a RV is just a change of the rate that it but, my revaluation  isn't the same a s the gurus not only that the Government could care less about a revaluation the only thing they care about is if the taxes are paid so you can pay it or they will come and get it

Nobody even talked about a floating dinar until I started the conversation in 2012.

Now let's look at what a real currency expert has to say about Iraq floating their currency, instead of listening to an anonymous guru.  On my blog Dinar Douchebags John Jagerson said:

The terms "peg", and "dirty and/or managed floats" are a little hazy. Strictly speaking there is only one true currency peg out there that I know of and that is between the countries that use the euro and those that hope to use the euro in the very near term. None of the economies mentioned in the article (Qatari rial, Saudi riyal, Omani rial) are strictly pegged but its true that they are darn close. For example, the SAR will fluctuate by a few pips each week and once in a while it will fluctuate quite a bit, like it did in 2009 and 2008 (or like it has every time there is a financial crisis in the U.S.).

... the dinar does float. These are distinctions that I think dinar pumpers are making out to be something they aren’t. If you can buy and sell it on the market (which thousands of dinar investors can confirm) then it is floating. The question is whether that float is pegged or not. So by definition, a ‘free float’ means you are either not intervening or intervening very little in your currency’s value. You can’t just dictate its value to the international market, you have to work to get it set where it is.
So what if they allowed the dinar to float freely without intervention? Interesting question and it’s a little complicated. It is really a balance between the current account and fiscal spending. If they don’t intervene then oil exports and their current account surplus could drive the currency higher. However, if the price of oil drops from where it is now and the government’s budget deficit continues to grow then inflation will rise and the currency will drop.


So according to John, a true expert, the IQD is already floating and has been since it was introduced, but it is a tightly managed float that gives them the exchange rate stability they need to conduct business and attract investment.  All of the articles people like Kaperoni cite are talking about a managed or "dirty" float to maintain the peg, not a free float like the USD.  That won't happen with an oil based economy because it could destroy their economy.
*****************
Busting Gurus Since 2011

Kap lies about starting the conversation in 2012 about "floating Dinar", but we all know that.

Maybe Kap should re-read Sam's articles from 2011...And a few others since!


Then there is the IMF stuff...


There was even some discussion here at Dinar Daily in January 2012...

And of course all the Gurus, but Kap, were all over the "floating Dinar" discussion...

Wasn't it great of Ssmith to take the time to re-document it?


Since Kap is too busy boosting his ego, he may have missed a conversation we had a couple of months back about the Iraq Dinar that has always been a pegged currency.

Maybe Kap can explain what value there is for the featured products he offers, other than lining his own pockets.

And what are we supposed to do with that donate button of his?

Kap responded to me pointing out that he wasn't the first to talk about the "floating Dinar" back in 2012: 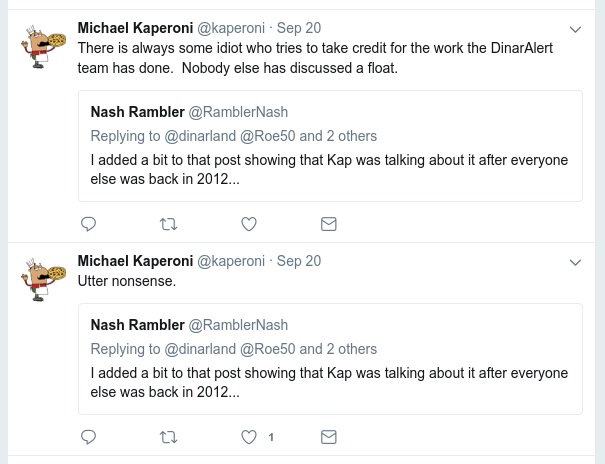 And now Kap is afraid of little ol' me. LMAO!

This is what these Gurus do when you point out their lies.

They are that afraid to engage in any discussion which points out facts which contradicts what they are promoting. Especially when it cuts into the money they make off of the Iraqi dinar Investment Scam!
*****************

Anybody else get blocked because they engaged a Guru who's afraid of the facts? LMAO

Today at 2:23 am by RamblerNash